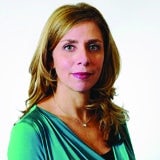 Mendelsohn (pictured) laid out plans for her two year presidency at her inaugural address at the IPA Members Lunch today (April 6).

She says that the industry is guilty of “a deep sense of unease” that borders on Mad Men-style nostalgia, according to Karmarama executive chairman and president Mendelsohn.

As a result, she is calling for the industry to seize the initiative because currently a crippling confidence exists.

She says: “We are almost mute when leading politicians, like our current Chancellor, assert that advertising can be switched off without any consequence to a business.”

In an attempt to seize the initiative, Mendelsohn has unveiled a number of plans that are designed to create a generation of creative pioneers.

This includes an IPA partnership with Google that will provide the funding to invest in a programme aimed at creating future “digital champions”.

The initiative will be facilitated by Skillset who will choose 100 graduates from 100 colleges and universities.

An IPA council study tour to California will be led by Mendelsohn this November, in order to reach out to creative partners in the film industry and digital partners in Silicon Valley.

Mendelsohn explains: “I want the leading creative lights of the Valley and Hollywood to think of the UK first, before they think of Madison Avenue.”

Further international links will be built with markets including China, which will involve a new memorandum between the IPA and the China Advertising Association.