The marketing drive will take the Nuts brand into 49 football grounds across the UK as Premiership clubs including Tottenham, Chelsea, Everton and West Ham host the month-long campaign.

The marketing ties into the magazine’s exclusive deal to feature iconic Warbury Warriors football comic strip Striker, which is currently in its 25th year.

Nuts has partnered with in-stadia advertising specialist SportsRevolution to display the Striker-fronted marketing campaign across all 20 Premiership football grounds.

Throughout February, Nuts branding will appear across a number of ad formats in grounds including six sheets, in-washroom and concourse screen advertising estimated to reach 1.8 million football fans.

Head of marketing Clair Porteous says: “The Nuts Striker in-stadia campaign not only exposes our core values to millions of UK men in their home from home, it anticipates this year’s biggest sporting event by reinforcing the message that Nuts will be the men’s lifestyle magazine for the World Cup.”

The new look magazine will include a refreshed design and a number of new editorial sections which aim to underline the title’s position as Britain’s biggest-selling men’s lifestyle magazine.

The Nuts refresh follows six months of research into what its readers want from the title and includes a revamped news section, a renewed focus on fashion which includes “Nuts’ 10 Must Haves of the Week”, which also highlights the partnership with online retailer Mainland Menswear and “Nuts About Sport”, a section which looks at the funny side of sport highlights.

Publishing director, Jo Smalley, says: “Nuts has been number one since day one, and men’s priorities haven’t changed. But their expectations and the media landscape have – even the biggest brands must work harder than ever to connect with their audience. With this refresh, Nuts once again redefines how print should engage young men.”

The marketing campaign will also run across other IPC brands including NME and Loaded as well as on TV and online with external partners, such as Comedy Central and mtv.co.uk. 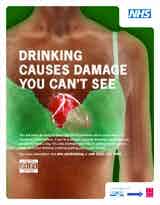 The Department of Health has joined forces with three leading charities to launch a £6m campaign to highlight how alcohol misuse can lead to a range of health problems not just liver disease.

In a week where the Apple iPad launch showed just how innovative digital technologies are fast becoming, a shadow has still been hanging over display advertising with Marks & Spencer coming under scrutiny for placing a champagne ad on a website aimed at young girls, and separately another website for girls was attacked for encouraging them to adopt children as fashion accessories in a web game.