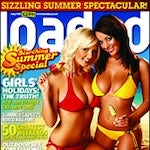 The independent publisher is thought to have approached IPC and the two publishers are in talks over the future home of the magazine.

One industry source speculated that the sale of the title was likely to go ahead.

An IPC spokesperson says: “We have received an offer from Vitality Publishing and we are in discussions with them but we have no more comment at this time.”

Loaded launched in 1994 and was the UK’s first major lad’s mag, but it has been haemorrhaging circulation since its peak in the 90s.

Men’s magazine Front and cinema magazine Hotdog were bought by newly-formed independent Kane from Sport Media Group (SMG) for £87,500 in August last year. At the time Kane owner Dominic McVey said: “As an independent we believe we can be nimble and opportunistic, empowering the team to build on the success to date and collectively realise the brand’s ambitions both in print and online.”

Earlier this week, IPC announced that its former CEO Sylvia Auton is returning to resume her leadership role in January 2011.