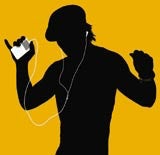 Apple’s iPod appears to be going from strength to strength, with more than 500 million songs now having been downloaded from the company’s iTunes online music store.

But in order to stay ahead of cheaper MP3 rivals and to fend off competition from an increasingly sophisticated mobile handset market, Apple is having to innovate and will unveil an iPod that is be able to download music videos this autumn. The company has reportedly been in talks with music companies including EMI, Sony and Warner about licensing music video sales through the iTunes website.

Apple has already launched an iPod that can take pictures in a bid to match the product offer of mobile phones. Pre-recorded audio clips can also be downloaded and stored on an iPod.

But the mobile market is champing at the bit. Sony Ericsson has this week announced the launch date of its much-hyped W800i Walkman phone, which will become available on August 12, and Motorola is expected to unveil a handset next month that will enable users to download music from iTunes to their phones and synchronise the device with their computers’ music libraries.

Analyst Fred Bolza, managing consultant for Capgemini’s telecoms, media and entertainments practice, says a video product would be the “next genuine step” for the iPod.

He describes the iPod as the “category killer” in the digital music market and says that Apple has combined aggressive marketing ploys, such as launching variations like the iPod shuffle, with defensive moves, like allowing Motorola to put iTunes on its handsets, to maintain that position.

But while phones are catching up and can offer many of the same features as an iPod, the Apple product is viewed as a more secure hard-drive storage device, ultimately connected to a computer.

“The idea is that it is a stable carrier, ” says Bolza. “Mobiles can be a bit more touch and go.” He adds that although it makes sense for people to combine their music, camera and phones into one device, such convergence does not always succeed, claiming that it is up to the competitors to overtake the iPod, which has defined the genre.

However, Vodafone global content services business development manager Jean-Paul Sanchez says that phones will rival iPods for memory within the next year.

“It is only going to get harder for Apple,” he says. Phones offer true availability to customers as video and music can be downloaded at the touch of a button without the need for other devices.

He adds that relationships between the handset manufacturers, media companies and content providers are already in place.

Sony Ericsson claims that it does not consider its new Walkman phone to be a direct rival to the iPod, but a spokesman points out that 18 months ago mobile phone