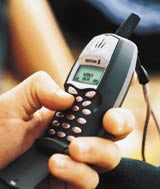 In 2000, five mobile phone operators – T-Mobile, Vodafone, Orange, O2 and Hutchison Whampoa – invested more than &£22.5bn to buy the much-vaunted licence for third-generation (3G) mobile phones. Three years on, and only one service is in operation, and return on investment is still some way off.

Hutchison Whampoa launched 3 in April, but has secured just five per cent of new handset sales and upgrades, despite offering discounts on its handsets a month after launch. Other mobile operators are still some way off providing 3G services, and the eagerly anticipated 3G revolution has largely failed to materialise.

However, despite the shortcomings of 3G and its failure to meet consumer expectations, it seems that this has not affected consumer confidence in the wider mobile market, which remains buoyant.

In the year to August 2003, 15.5 million phones were bought in Britain at a value of &£1.2bn. There are 38.5 million people in Britain who own a mobile phone, with 43 million active handsets in operation. That means 13 per cent of users own and use more than one phone.

The level of spending on mobile phone handsets and calls has also risen in the past year, from &£9.5bn to &£11bn. Despite the popularity of pay-as-you-go as entry-level phones, contracts now account for more than 35 per cent of the market.

Despite holding little more than one-third of the handset market, contract phone users make up almost 60 per cent of the total value of the mobile market. In 2003, average monthly spend among contract users was &£35.83, compared to &£12.24 for pay-as-you-go customers.

The majority of contract mobile phone users are 25- to 44-years old, and this consumer group accounts for 48 per cent of total spend across the mobile market. However, under-25s, who are vital to the pay-as-you-go market, have shown the largest overall increase in spend during the past 12 months, with an increase of more than &£500m in the year to August.

The majority of this spend has come from the contract market, and this suggests that younger consumers are continuing to buy into the mobile phone culture. Users under 25 will be key to driving forward major growth in new emerging mobile technologies, such as 3G.

The importance of the youth market is highlighted by sales of the latest mobile models such as camera phones, colour handsets and MMS-enabled handsets. Since December 2002, new 2.5G (the level preceeding 3G) models have proved popular. In the past six months, a quarter of all phone sales and upgrades have been MMS-enabled handsets, with 60 per cent of those handsets also being camera phones.

The largely prohibitive price of 2.5G handsets has impeded wider take-up among pay-as-you-go users. However, as handset prices fall and older models are no longer available in stores, these models will become more accessible to all consumers and this is expected to drive sales further.

While sales of 2.5G, MMS and camera phones in the past year have driven market growth, the future of the mobile landscape in the UK essentially rests on two key factors: the potential of 3G technology and the number of operators that the market can support before it reaches saturation.

It is expected that in 2004 the major UK network operators will concentrate on rolling out 3G services with significant marketing support. While 3 has been blazing the trail, though slowly, by enlightening consumers of both its service and the technology generally, T-Mobile, Vodafone, Orange and O2 do have significant advantages that Hutchison Whampoa did not have at launch.

All have an established customer base that they have educated gradually with the introduction of colour screens, picture messaging, text alerts and game downloads. It is anticipated that 2.5G services such as Vodafone Live!, the picture and downloads package, will smooth the way for the arrival of 3G as much as being profitable entities in their own right.

The operators, manufacturers and retailers will all be concentrating on convincing the market that each new 3G service is the “new text message” – something the user cannot live without. The change from big and brick-like phones to small, sleek and light models has shown that consumers, especially at the younger end of the market, are fussy when it comes to their mobile. It is inevitable that some services will become the “next big thing”, while others will fail, but it is certain that content and style will be crucial to the success of 3G.

The 3G market will grow much more quickly once all operators are committed to it. Whether the five licences will be operated by five different operators is another question. One which, in a market already moving towards partnerships and consolidation, is unlikely to have a positive answer.