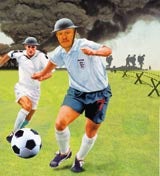 It’s fair to say that applicants weren’t queuing around Soho Square for the job of chief executive of the Football Association. The tasks ahead, ranging from restructuring sponsorship deals to restoring shattered morale, require Herculean strength and tenacity.

Few would envy ITV head of sport Brian Barwick’s new position: his life will come under the sort of scrutiny that the likes of future charge David Beckham experience. As one former FA employee says: “The FA is the third highest-profile institution in the country after the royal family and government, so you are never out of the spotlight. Barwick had better be prepared for a job that is both hugely political and massively vicious.”

Barwick’s appointment has, of course, been made under the cloud of the latest FA sex scandal, ensuring that many of his first headlines will deal with the legacy of “Svengate”, which led to the departure of his predecessor. The FA now faces a potential lawsuit from former employee Faria Alam over her dismissal following reports of a love triangle involving Mark Palios and Sven-Goran Eriksson.

Meanwhile, the FA is facing a structural review of the UK football authorities that could see the Premier League and Football League attempt to take control of their commercial affairs, leaving the organisation as little more than a front for the national team.

While Football League chairman Sir Brian Mawhinney recently played down a takeover of the FA, he added: “We want to see an improvement in the structure and function of the FA. What we think needs to come out of the review is a much clearer understanding of exactly what amount of the money generated will go down each of the channels.”

The FA now faces some of the most important commercial decisions of its history, with renegotiations of its five-pillar sponsor structure scheduled to kick off in August 2005. At the same time, its internal structure is volatile. One former FA employee says “staff morale is at an all-time low” and he believes Palios has not left the FA in good health. “It’s a very difficult inheritance,” he says. “Palios left the organisation in disarray because a lot of his changes didn’t make sense. Barwick now has to renegotiate with sponsors at a time when the FA is at a very low ebb.”

Barwick’s commercial abilities will be immediately tested. Many believe the Government’s recent Health White Paper, tackling obesity, is a signal that sponsorship from existing partners such as McDonald’s could be restricted. In addition, sponsors have expressed concerns about the value of an association with a devalued FA brand (MW October 16, 2003).

One FA source says the sponsorship structure will be changed after the existing contracts end. “The format will change, if only because we have a new commercial director. He will look at how it fits with the Wembley sponsorship deal, as there is potential for joint deals. Wembley opens in 2006 and the contracts are up for renewal at exactly the same time.”

But another source says the FA is running out of time to come up with a new structure, pointing to the fact the last sponsorship system took almost two years to create. Not only that, negotiations may prove more testing. The source blames Palios: “He ignored the FA brand and as a result the year-round interest in the England team and FA Cup has dipped massively. It will be difficult trying to sell the FA rights to sponsors.”

With such turmoil, Barwick might have been expected to have doubts about taking up the role. But his former boss, Mick Desmond, chief executive of ITV Broadcasting, says Barwick regards the position as his dream job. “Brian told us it was an opportunity that comes along once in a lifetime.”

Such a passion will serve him well. Those who know Barwick talk of his love of football. He is described as a “Scouser who would die for his beloved Liverpool” by former Carlton Sales boss Martin Bowley, who adds that the first and often overlooked criteria for anyone in the chief executive’s role is a diehard love of the game. “This is a dream job for him. He’s even got the sheepskin coat.”

Desmond agrees this passion for the game, coupled with his straight-talking nature, is exactly what the FA needs. He says Barwick will be an antidote to the years of scandal. “After all the sleaze and corporate mess, he’ll be a breath of fresh air. The FA needs a straightforward leader.”

Almost as important, perhaps, is Barwick’s extensive contact list of the game’s movers and shakers. Jim Hytner, former ITV marketing director, says: “Unlike those before him he knows every single important person in football.” This, adds Hytner, will give him an advantage in dealing with the politics that are part of the national game. “Barwick will bring a sense of humour and team spirit to proceedings. He’s very diplomatic and is well liked by all the important people.”

But even Barwick’s appointment has a whiff of politics about it. There were splits over his selection within the FA, with Premier League chairman Dave Richards and another three Premiership football chairmen said to have been opposed to it.

Given this uncertain beginning, some have worries over Barwick’s ability to handle the egos involved at the highest levels of football. One source close to both the FA and Barwick says: “This will be a real challenge for Barwick because he hasn’t got the experience of working with the various partners on a day-to-day basis. He has a steep learning curve ahead of him.”

Other sources point to Barwick’s strength as being “Mr TV” at a time when football is funded, fuelled and followed by television. The admission that Eriksson played David Beckham in the contentious England-Spain game last month because of his TV obligations underlines how much in thrall the FA is to the medium.

But ironically, says one source, Barwick might not be as media friendly as those at the FA believe. “You have to learn to ignore the media, which is difficult to do. Brian may have worked for ITV but he has a thin skin, which could be easy for the red-tops to puncture.”

He adds that very few can understand the pressure at the FA. Indeed, the last FA official to be appointed for his media savvy was Daily Mail sports editor Colin Gibson, whose tenure as communications chief was most notable for his ignominious departure after the Svengate story turned into scandal.

Barwick is certainly cut from a different cloth to Palios, whose background in accountancy not only led to an awkward press manner, but also led to reductions of funding for marketing.

But Barwick, say sources, has a better understanding of the need to market the FA in order for it to become a campaigning organisation. Desmond says: “He’s a campaigner. He will want to take the broad church of football with him.”

Hytner says his experience of Barwick at ITV supports this view: “He has always been very supportive of marketing. He is a marketer at heart and will see the value of the FA brand.”

Barwick may have a better understanding of marketing, but the jury is out on whether he is the right man to lead the commercial functions of the FA. Peter Gandolfi, head of brand development at sponsor Nationwide, says the FA will benefit from Barwick’s “extensive commercial experience”, but many more have doubts about Barwick’s ability as a deal maker. Colleagues and friends admit he is more of a leader than a man who finalises the details of deals.

At ITV, Barwick oversaw some notable successes. He superintended the football and rugby world cups on ITV, and brought in the Oxbridge boat race. But he was also at the helm when ITV Digital collapsed under the pressure of Football League rights, and presided over the primetime Premiership highlights package which struggled with low-ratings.

One source says Barwick’s success is dependent on him appointing a strong commercial deputy. This, he says, will enable him to concentrate on his strength: leading from the front. “Commercial savvy is the only question mark hanging over Barwick. It remains to be seen who will be doing those deals and pulling Wembley together, which could be his undoing.”

Another FA insider says Barwick’s experience in negotiating TV deals will be useful, but will not be tapped for at least four years because the media rights don’t come up for renewal until 2008. Of more pressing urgency, he says, are the sponsorship agreements that net the FA close to &£100m.

A match for sponsors

“The one thing Barwick won’t need help with is the TV rights deal as that is his background. But he will not know what it is like to do the down and dirty sponsorship stuff, such as dealing with a partner that is demanding a player’s appearance on a wet Wednesday in Liverpool,” adds the source.

Much of the responsibility for the FA’s commercial deals will fall to marketing director Jonathan Hill. But some are concerned that Hill’s background is too similar to Barwick’s. “Media rights is Barwick’s forte but it is also Hill’s, so there is some overlap,” says one source. “Barwick will need someone with a different set of skills to complement his own.”

Others say Barwick has a wider problem with staffing at the FA, which lost a swathe of senior employees during the Palios administration, says one former employee. “Palios let a lot of senior people leave, which has depleted the skills base at the FA. Barwick will have a lot of junior staff around him, and that won’t give him much protection when the inevitable scandals happen.”

Given this inevitability, Barwick’s fire control skills are likely to be tested sooner rather than later. In the meantime he has the small matters of a demoralised organisation, fractious stakeholders and weary commercial partners to deal with. Not to mention mapping out the future of the FA, whatever form that might be in. Lucky, then, that he loves football.