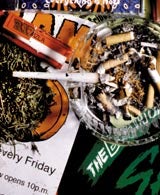 Legalise cannabis campaigners are scenting the heady smell of victory in their battle to have the herb decriminalised. But even if they are successful, important questions remain over how the drug could be marketed and whether it represents a golden opportunity for entrepreneurs and big business to turn cannabis leaves into a profit.

Campaigners are mounting a legal challenge in an attempt to decriminalise the possession of small amounts of cannabis, using article eight of the Human Rights Convention, which was enshrined in UK law last October. This establishes the right to respect for private life, except in the interests of national security, public safety or the economic well-being of the country.

Civil rights organisation Liberty is backing the defence of Jerry Ham, who faces a jury trial for possession of a small amount of cannabis. A similar challenge in Germany in 1994 led to a constitutional court ruling that to turn people possessing small amounts of cannabis into criminals was unconstitutional.

At the same time, a test scheme has been launched by police in Lambeth, where people possessing small amounts of cannabis receive a warning, rather than being arrested. And drugs company GW Pharmaceuticals, which has been given the go-ahead by the Government to develop cannabis-based medicines for pain relief, floated on the Stock Market last month.

But the picture was clouded by a call last week from former cabinet minister Mo Mowlam for the drug to be controlled, like tobacco or alcohol. Mowlam wants cannabis to be taxed and the revenue raised used to treat addicts of harder drugs, such as heroin or cocaine, and to support the National Health Service. The prospect of a health service funded from the proceeds of drug dealing may be too much for some people – and for legalisation campaigners the idea that the weed should attract the sort of taxes that apply to cigarettes and drink is anathema.

Supporters of decriminalisation fear that imposing heavy taxes might mean the existing criminal infra-structure of cannabis smuggling would stay in place if the legal version turned out to be much more expensive.

Some would prefer for VAT to be levied on its sale, and with sellers declaring their earnings from the drug, paying income tax at the appropriate level.

But if it were to be controlled rather than gradually decriminalised, there would be huge opportunities for marketers to create new brands and, more importantly, new delivery mechanisms.

It has always been assumed that tobacco companies would lead the way in developing cannabis brands, and they are reported to have trademarked names such as “Acapulco Gold” and “Red Leb” in readiness for the great day. While these companies will undoubtedly have considered the possibilities, industry insiders say they would be unlikely to court controversy as they are very protective of their reputation.

Legalisation would be a controversial move, and the tobacco giants would fear a backlash if they got involved. The worst effects of cannabis are those associated with smoking it, because it is usually consumed with tobacco.

Direct marketing agency Claydon Heeley Jones Mason refuses to work for tobacco companies, but says it would be prepared to consider creating marketing campaigns for cannabis if it were fully legalised. Communications director Jamie Priestley envisages different ways of consuming it, such as “alco-pot” or pyramid-shaped tea bags. There could also be patches, chewing gum, cakes and chocolates.

One company in Spain is already selling lollipops laced with cannabis. Shops can sell the sweets, called Cannalollys, legally because possessing small amounts of cannabis is legal in Spain.

Priestley says packaged goods companies would be more adept at marketing cannabis than tobacco companies. He accepts it would be difficult to give various brands a point of difference, as they would all offer the same basic effect. This, he believes, is why packaged goods companies would excel – they are used to turning products with few real differences into brands with unique selling points.

“The experience would be the USP. Flavour would come into it, but it would require every consumer differentiation programme under the sun. When you run out of ideas, you would bring out an organic version,” he says.

Five years ago, Channel 4 ran a special night of programmes about cannabis and asked design agency CLK – now Corporate Edge – to develop a branded cannabis product as part of the evening. Irene Inskip, the Corporate Edge director who worked on the programme, says cannabis would be marketed like newly developed ingredients such as Nutrasweet, that appeared in many new products initially, before being gradually refined.

“If cannabis were legalised, it would go through the same new product development cycle as everything else – first it would appear in practically everything, then as with all products, it would become more specialised and niche in different price ranges,” she says.

The product CLK finally came up with was a box of upmarket cannabis chocolates, a sort of classy After Eight brand, moving the drug away from what she calls its “grubby” downmarket image at the moment.

So one line of argument runs that legalisation of cannabis could actually lead to it being consumed more safely, with alternatives to ingestion through smoking being developed. But the problem is that smoking is the most immediate and easily controllable method of consumption. Eating cannabis can be unpredictable, the effects can last many hours and it can take up to two hours for them to be noticed.

Marketers are no strangers to cannabis – in Marketing Week’s recent marketers’ lifestyle survey, nearly a fifth admitted consuming the drug within the previous 12 months (MW June 21). In advertising agencies and other marketing services companies, the figure is probably much higher. Such stoned-out executives would jump at the chance to create new brands for what is undoubtedly a fascinating product.

But for critics of the world of marketing, the prospect of big companies anaesthetising the populace for profit may sound a little sinister, reminiscent of Huxley’s novel Brave New World and the “happy” drug, soma. Like alcopops – though probably worse – there could be a backlash against the marketing of cannabis that would reflect badly on the whole industry.

Regulation of alcohol has given the state considerable control over people’s lives, particularly in the UK – it can even decide what time you should go home at night. Fears could spread of powerful branding companies wielding social control through drugs.

It all seems a long way off and might never happen. But the pressure is building for a change in the law soon. Once again, marketers could be called upon to make the world a happier, funnier place.

Championship Auto Racing Teams (CART), the US equivalent of Formula One, is targeting the outgoing, adventurous, 20-something “Friends generation” in a bid to raise the sport’s profile on the eve of its UK debut. The race, known as the Rockingham 500, will take place on September 22 at the recently constructed Rockingham Oval, Northamptonshire. It […]

Summertime, and the living is easy far too easy in adland, it appears. While the Diary was enjoying a quiet drink in a Soho pub, a direct marketing agency team stormed in to shake things up. Fresh from their success in bagging a large part of the Prudential’s below-the-line business, a team of creatives from […]

Abbey National has announced a Â£1m rebranding campaign, only hours after the strength of its brand proved to be a major impediment preventing an Â£18.2bn takeover by Lloyds TSB.