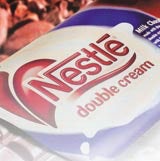 Today’s consumer is spoilt for choice when it comes to choosing a sweet snack, but while chocolate is still a regular treat for many, overall sales are in decline. The chocolate fixture may be packed with products, but there is little real innovation as manufacturers increasingly turn to brand extensions to drive sales.

Indeed, it is telling that the chocolate category’s biggest brand, Cadbury Dairy Milk, is celebrating its centenary this year. Launching a new brand into this category is an expensive investment and multi-million pound support packages do not guarantee success, as Nestlé Rowntree has found out with Double Cream.

Launched originally as a challenger to Dairy Milk and Masterfoods-owned Galaxy in 2002, Double Cream is now being repositioned for the second time in two-and-a-half years and is destined to become a niche product. Furthermore, its Double Berry variant, launched when the brand was given its first revamp (MW January 22, 2004), is also to be scrapped after just a year (MW last week).

When Double Cream first hit the shelves, Nestlé hoped that it would help to establish its chocolate credentials in the UK and create a new “premium mainstream” segment in the category. To support this positioning, the marketing focused on the ingredients – double cream instead of milk, and the provenance of the Ecuadorian beans.

However, Double Cream has still failed to provide the kind of sales that would justify a continued position as a core product. AC Nielsen figures for 2004 show that the value of the brand has grown by &£5m to &£26m over the year.

A Nestlé spokesperson says: “We regularly monitor our product portfolio and we have decided that Double Berry has now reached the natural end of its run. This does not affect the core Nestlé Double Cream range, which will continue to sell most effectively as a niche, indulgent brand.”

Industry observers claim that Double Cream has fallen victim to aggressive price promotions from rival chocolate brands. When Double Cream launched at 42p, Cadbury responded by cutting the price of Dairy Milk to 25p. One industry insider says: “It was very difficult for Double Cream because Cadbury and Masterfoods went all out to stop it. But this is a problem with the market as it is now driven by promotion and that is sucking out the value.”

The insider adds that it is going to become harder to launch completely new products because there are already so many brands in the market and manufacturers do not have the budget to build new brands any more.

But Cadbury spokesman Tony Bilsborough disagrees and believes that although it is becoming hard to launch straightforward chocolate bars, there are still several ways to innovate. He says: “In terms of innovation, it depends how you look at it. It can be done through an extension to an existing brand, new packaging or you can bring out something completely new.”

He believes that changes in consumer lifestyles are creating new opportunities for innovation. He points out that 30 years ago there would have been no need for products like Cadbury’s Miniature Heroes or Snaps because visiting someone’s house was a formal occasion. However, now people meet friends to watch television or films and such products suit these informal occasions.

For many chocolate manufacturers, bringing a new product to market as an extension to an existing brand is a strategy that is significantly lower in risk and cost than launching a new brand from scratch. It is a route that has been adopted by Cadbury with Snaps, a range of wafer-thin chocolate curves marketed under the Dairy Milk master brand (MW June 24, 2004), and Masterfoods with Mars Delight, a bar filled with caramel and chocolate cream combined with wafer which comes in two pieces and aims to have a lighter texture than the original Mars bar. Cadbury claims that its product, aimed at creating an indulgent segment in the sharing market, is already worth &£13m and Masterfoods says that Mars Delight was its biggest countline launch for more than a decade.

But while such products will help to reinvigorate interest in the category, it is doubtful that they will increase penetration, which is already at 88 per cent. According to data from Mintel, volume sales of chocolate confectionery declined by four per cent between 1999 and the end of 2004 and value sales fell by three per cent over the same period, despite some recovery in 2003. However, some segments of the market have continued to perform well, with moulded chocolate bars increasing sales by 29 per cent since 1999.

Starcom Motive group account director for Cadbury Matt Wilson says there will always be scope for new formats and occasions, but that these will increasingly be achieved under master branding strategies such as Nestlé’s brand extensions of Kit Kat into Kubes and Editions. He says: “It makes sense to exploit an existing brand when it has already got consumer trust. It is expensive to develop that from scratch for a new brand.”

Although Cadbury, Masterfoods and Nestlé dominate the market, niche operators such as Green &amp; Black’s, Lindt and Thorntons have not been put off developing new products. Thorntons master chocolatier Barry Colenso says that consumers are looking for product suitable for a special occasion when they visit the confectioner, and that means it has to keep developing new ranges such as Dessert Gallery, a selection of chocolates based on popular desserts.

Colenso adds: “It has always been hard to innovate so we are also looking at different eating opportunities.”

As the obesity debate continues to rage and pressure mounts on confectionery manufacturers, one area that is likely to see innovation is low-calorie products. While this does not offer the same degree of indulgence that has driven innovation in the confectionery market, it may be one of the few ways that manufacturers can stop sales from declining even further.l