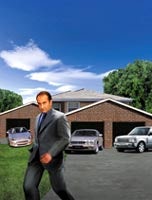 When Ford first created an umbrella organisation to house its family of luxury cars, the move was met with a great deal of admiration, peppered with a certain amount of jealousy from within the car industry.

The Premier Automotive Group (PAG) was set up by Ford chief executive Jac Nasser two years ago when he moved the company’s luxury brands to a separate division.

The strategy was hailed as the perfect way for luxury marques such as Jaguar and Aston Martin to tap into Ford’s huge resources without being diluted by its more mainstream brand.

But two weeks ago, after a series of PR disasters and a sales collapse in Ford’s crucial North America market, Nasser was fired and his responsibilities handed over to William Clay Ford, the great-grandson of Henry Ford.

On the same day as Nasser’s departure, the first shake-up of PAG was unveiled. Ford’s three luxury UK marques, Land Rover, Aston Martin and Jaguar, are to be united under one operating committee. Land Rover chairman Bob Dover has been given the job of overseeing the three companies.

Ford has been quick to stress that this is not a merger, and not in any way connected to Nasser’s exit, but the reshuffle has already had its first casualty. Jaguar managing director and former Ford of Europe marketing chief Jonathan Browning left the company because he could not agree to the changes, which would install another layer of management between him and the new chief executive.

“Browning felt he just couldn’t stay at Jaguar. He had too many concerns over the future sovereignty of Jaguar within the new structure,” says Professor Garel Rhys, director of Cardiff University’s centre for automotive research.

Rhys believes Ford handled Browning and his departure badly and says: “I think Ford has made a mistake letting him go, it can’t afford to lose people like him.”

Rhys’s thoughts are echoed elsewhere in the industry, but those who know Browning believe he will be snapped up by another car company. His employer before Ford, General Motors, has been mooted as a future workplace for Browning.

Doubts over the future of PAG arose immediately after Nasser’s exit. Without its creator – and perhaps its president (many suspected Dr Wolfgang Reitzle, the former BMW executive brought in by Nasser to head PAG, would walk out with him) – the future of PAG looked shaky.

The more cost-conscious approach that Ford has had to take after Ford sales fell in North America has not helped PAG’s case for survival. William Clay Ford has a new “back to basics” approach, which has sparked speculation that there will be less emphasis on luxury cars at Ford, and some claim it could be the beginning of the end for PAG.

PAG has been the subject of many gripes within Ford about the amount of money and executive time that has been lavished on the division.

“There are questions being asked by Ford people, particularly in Europe,” says one insider. “Questions [that range] from ‘what financial and brand benefits have really been gained?’ to ‘why does the group need offices in Berkeley Square?'”

Those who either work at, or closely with, PAG are adamant that the structure will remain intact, albeit in a slightly different form.

Rhys is one who believes PAG will stay, but says the group will have to evolve. “Until now [PAG] has been just a statement of intent, a heading on company notepaper. Now Ford has to make the division a more coherent group in itself,” he says.

Setting up PAG was one of the first high-profile changes Nasser made when he was appointed chief executive in 1999. In March that year, and on the same day the company announced its intention to buy Swedish car company Volvo, Ford announced the creation of its new luxury group. As well as Volvo, the group would house Jaguar, Aston Martin, Lincoln and would later add Land Rover after acquiring the marque from BMW.

Rhys says Ford is now aiming to create cross-pollination across its UK brands but will have to ensure it keeps the brands separate. “This is the danger of trying to bring those companies [Jaguar, Ford and Land Rover] together,” says Rhys.

Browning, it seems, was not prepared to run the risk of sacrificing Jaguar’s increased sales and hard-earned quality gains it has achieved over the past few years. He may also have sensed the sacrificial knife held aloft in the event the experiment is not deemed a success.

Luxury cars have a major role to play in the car market, particularly when the economy is weak, as it is now. The higher prices consumers are prepared to pay for top-of-the-range marques are rarely eroded and they are a valuable boon to a slow-moving car market. This could work in PAG’s favour and insiders say that in order to make PAG a success, the company will have to keep Reitzle – one of the most admired executives in the car industry – happy, while reining in the group’s costs.

William Clay Ford’s new right-hand man and former chairman of Jaguar, Sir Nick Scheele, knows this well, and has acted quickly to re-establish Ford’s enthusiasm for its luxury brands in the aftermath of Nasser’s exit. The company issued a statement last week, from Ford’s headquarters in Detroit, to douse speculation over the future of Reitzle and PAG.

In the statement, Scheele says: “Our Premier Automotive Group is a critically important part of our global corporate portfolio and a major engine of growth for the future.” He added that Ford chief technical officer Richard Parry-Jones was moving back to the UK from the US to lead technical and product developments for PAG. Parry-Jones will report to both Reitzle and Scheele.

At the same time, Ford head of global marketing Jan Klug is to extend her role to take in PAG. She will report to Reitzle. Insiders say this is an extension of Reitzle’s remit, which has been engineered to allow for “closer ties” between Ford and PAG.

The moves are, without doubt, a public show of Ford’s allegiance to Reitzle. But one PAG insider says that closer ties within PAG would, in any case, make good sense and Reitzle is likely to engineer this now that he has been given a public display of confidence by his bosses.

“There are separate offices for each of the PAG marques, not just in the UK, but across Europe and the US, so that’s one waste area that could be looked at. Just because the marques are different, does not mean they will become ‘infected’ if there are closer ties,” says the insider.

“The UK factories are close together so why not make one boss run all three? It would make more sense for our dealerships – you could soon see Premier Automotive dealers selling Land Rovers, Aston Martins and Jaguars. In any case, the reshuffle frees Reitzle’s time and will allow him to concentrate on product development and increasing sales.”

Analysts believe that for the time being PAG will not acquire any more brands. But this Nasser legacy should certainly fare better than some others – his “cradle to the grave” strategy, which ambitiously aimed to cater for customers’ car needs over a lifetime, right down to the acquisition of scrap yards. Nasser’s e-commerce ideas are also expected to take a back seat while the company concentrates on reviving its North American business.

PAG, it seems, is admired and envied in equal measure within Ford. Ford personnel criticise its lavishness, but a more telling point is that at the company car park at its Detroit headquarters there are more Jaguars and Land Rovers than Fords. Although William Clay Ford’s “back to basics” philosophy will place renewed emphasis on the blue oval Ford brand, Scheele will be keeping a close eye on PAG.

Further consolidation within the group is likely, particularly in the light of last week’s regrouping of Ford’s UK luxury car marques, but as long as Reitzle remains at its helm the luxury brands division looks set to stay intact. However, were he to leave, the resentment that has been bubbling under the surface since PAG was set up may well erupt.