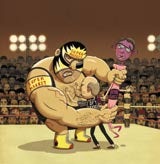 The Office of Fair Trading last week painted a rosy picture of the relationship between supermarkets and their suppliers. The competition watchdog had just published the results of its latest investigation into the workings of the “Supermarkets Code of Practice”, created after the Competition Commission’s 2000 report, which found that the big retailers were “carrying out practices affecting the competitiveness of some of their suppliers”.

The code was intended to head off accusations that the big supermarkets – which control the lion’s share of the grocery market – were bullying their suppliers and placing exacting conditions on them.

The OFT’s investigation, published last week, concluded that, by and large, the chains treat suppliers fairly and shoppers are benefiting. It found only limited evidence of the code being breached, though it was accused of naivety in calling on suppliers to “overcome the fear of complaining and use the code’s dispute resolution procedure when they have concerns about their dealings with supermarkets”.

Some marketers see this as a tall order. Any supplier complaining about its treatment by one of the big supermarkets might expect its business to suffer as a result. And most sources contacted by Marketing Week think the code has done little to loosen the stranglehold the biggest supermarkets have on even powerful brand owners.

Brand owners’ trade body the British Brands Group believes the code has had “precious little impact”, according to spokesman John Noble. He says brand manufacturers would much rather work in collaboration with retailers than refer to the code and he thinks that complaining about a grievance is a last resort. “Where there are problems, the code doesn’t help very much,” he says. “The code itself is very vaguely worded: if you have a particular problem, it is difficult to know whether you are covered by the code. If you take the complaint to the retailer, there is a suspicion that the retailer’s interpretation of the word ‘reasonable’ will be the one that prevails.”

The OFT’s research project analysed a sample of 500 grocery supplier relationships with the big four supermarkets (Tesco, Asda, Sainsbury’s and pre-takeover Safeway). This analysis revealed “relatively little evidence of breaches of the code,” says the OFT. But it did uncover evidence that retailers were demanding lump-sum payments for continuing to stock products – a contravention of clause nine of the code.

Most of these demands were made by Safeway before it was taken over by Morrisons, which says the practice has now stopped. But clause nine does seem open to interpretation. It aims to stop supermarkets demanding lump-sum payments for continuing to list a product, though it permits retailers to make one-off charges for newly launched products.

A lump sum is permitted in relation to a promotion or for “new products which have not been stocked, displayed or listed by the supermarket during the preceding 365 days in 25 per cent or more of [a chain’s] stores and [if the payment] reflects a reasonable estimate by that supermarket of the risk run in stocking, displaying or listing such new products”.

Again, everything depends on that word “reasonable”.

The whole issue of requiring suppliers to pay lump sums in order to put new products on the shelves is seen by some observers as detrimental to the interests of consumers and suppliers. According to Ric Simcock, managing director of consultancy Elephants Can’t Jump and a former European marketing director of Pedigree Masterfoods, “brand owners are big and ugly enough to look after themselves. But listings fees and promotion fees create big barriers to entry. Some innovations never see the light of day because companies can’t afford the costs of entry. You have to gain huge scale straight away once you pay a listing fee. It feels like blackmail.”

If anything, this benefits the big established brands. But it discourages the food industry from responding to trends.

A probably apocryphal but now famous story, recounted by packaged goods account managers, concerns a supermarket buyer who would discuss a deal with the brand owner’s salesman, then dip his hand into his desk drawer and take out a Sooty hand-puppet. If he didn’t like the deal offered by the seller, he would look at the puppet and say: “Sooty says no deal,” and that would be the end of the conversation. The implication is that the buyer has all the power and can joke at the supplier’s expense.

One source remembers a huge row that blew up last summer when a supermarket launched what one of its buyers called “Operation Sooty”, demanding a larger share of revenue from each of its major suppliers. It argued that since its overall sales had grown, suppliers had benefited by selling more of their products. So it felt justified in demanding a greater share of their revenue.

The logic is that if a chain – Tesco, for instance – is increasing its overall sales every year, through acquisitions and by beating the competition, suppliers are sharing in that growth and should expect to take lower margins. But since the supermarket is the one driving the growth, the supermarket has huge power to determine how much of their margins suppliers should sacrifice.

In this example, the profile of Tesco stores and customers means that if it cuts prices on goods, it stimulates a far higher level of sales than any other supermarket chain. So it could argue that suppliers that cut their prices to Tesco will benefit more than those cutting prices to other retailers.

The source says that the job of selling to supermarkets has become unpopular among national account managers. “It used to be a badge of authority to be the client side account manager on Tesco – you were second in line to the sales director. Now it’s just a shit job, and they just put hard men into those positions,” he says.

He adds that payments between suppliers and retailers used to be passed on in “brown envelopes”, but now the whole process is official. And with the growing power of the supermarkets, he says, “it is an exercise of power the likes of which we have never seen before.”

What may be a virtuous circle for retailers, with lower prices leading to higher sales, can turn into a vicious circle for manufacturers. They find that the increasing demands for margin cuts mean less money for innovation and investment in new products, thus weakening their overall position.

“The brand owners will pay and play: there is a price for being in the power brand arena because you get huge volume. But there is huge dissatisfaction, people are saying this is just outrageous,” says the source.

He adds that some companies have powerful enough brands to resist the retailers’ demands. “There are one or two exceptions – Procter &amp; Gamble could take on Tesco at its own game. But the only leverage it has is its strong brands.”

Tesco, which committed no breaches of the code, according to the OFT investigation, is appointing a code compliance officer and has invited its UK suppliers to provide anonymous feedback on working with Tesco.

Chief executive Sir Terry Leahy says: “We are pleased the audit found no single instance of a breach of the code at Tesco. Our compliance with both the spirit and letter of the code encourages strong supplier relationships. That is not to say problems do not arise – they do, but our close relationships with suppliers mean that these are aired and usually resolved by constructive discussion.”

Tesco is launching a supplier survey and is sending out questionnaires. “The results will help us understand what is good and where we can improve,” says Leahy.

The OFT expressed surprised at the audit’s finding that there are few written accounts of the deals struck between suppliers and supermarkets. “This is surprising and the OFT urges suppliers to ensure that they obtain and understand these additional particular terms,” it says.

One source says this is further naivety on the part of the OFT. Small suppliers could benefit from having clearly defined contractual agreements, though the terms would probably work against them.

But, in fact, the big brand owners like to keep a certain informality in their dealings.

“There is a potential advantage for brand owners in keeping it vague as to what terms apply at any moment in time,” he says.

When competition authorities look at the grocery market, they see prices being pared down to the bone, keeping a lid on inflation. For this reason, they are unlikely to rock the boat: if suppliers are being squeezed, that brings prices down for consumers.

The concentration of power in the hands of retailers may be fuelling changing attitudes among consumers, however. Mintel last week published its annual British Lifestyles report, identifying a new strain of rebellion among British shoppers. It said a fifth of shoppers preferred to visit local shops and a third liked going to street markets. The supermarkets risk becoming boring by failing to stimulate sufficient innovation.

But until – and unless -Âconsumers really do turn away from the big chains, suppliers’ only bargaining chip against the multiples will be the strength of their brands. Without a “power brand”, they will have very little power at all.v