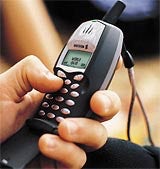 Mobile phone operators are again under attack from consumers and lobby groups on health grounds. The focus of the controversy this time is the “secret” location of mobile phone masts at 230 petrol station forecourts and in 120 McDonald’s fast-food restaurants.

The sites are not entirely secret, as mobile phone operators have to report the whereabouts of their transmitters to the Radiocommunications Agency. But the surreptitious nature of the sitings – hidden in forecourt price signs and disguised as wall fixtures – has done little to quell consumer fears about a possible link between mobile phones and cancer.

New research into the effects of mobile phones on health is about to be published. The Link Mobile Telecommunications &amp; Health Research (MTHR) Programme is meeting scientists next month to discuss its results and the latest international findings on the issue. Should any evidence of a link between ill health and mobile phones be found, the industry could face a consumer backlash.

The latest furore could not come at a worse time for the network operators. They have been crippled by the &£22bn they had to fork out to buy third-generation (3G) licences and desperately need consumers to adopt early 3G services, such as picture messaging.

However, the roll-out of 3G could incite even more consumer disapproval because it requires additional network capacity, which means more masts. Liberal Democrat MP Phil Willis, who chairs the All-Party Mobile Communications Group, believes another 20,000 transmitters will be required.

Mobile phone operators are quick to downplay the increase in power, especially as most transmitters emit 100 times less radiation than the permitted amount, according to the National Radiological Protection Board. But this does little to calm consumer fears, especially when the industry stays tight-lipped. “Whenever there is a lack of transparency, there is a lack of consumer confidence and an element of fear,” says Willis.

The Stewart Report, published in May 2000, attempted to investigate consumer health fears. Produced by the Independent Expert Group on Mobile Phones (IEGMP), a working committee set up by the Government and chaired by Sir William Stewart, it found no conclusive proof that mobile phones could adversely affect health. It recommended a precautionary approach “until much more detailed and scientifically robust information on any health effects becomes available”. MTHR was set up in its wake to continue research into the subject. The EU and the World Health Organisation (WHO) are also monitoring the matter until new scientific evidence emerges.

There are parallels to be drawn between mobile phones and tobacco, especially as it took about 30 years before conclusive evidence linked smoking with cancer. Many people fear mobile phones might represent another ticking time-bomb. “The WHO wouldn’t be carrying out massive research unless it thought there was an element of risk that needed to be explored,” says Willis.

The mobile phone companies are keen to stress how much their products and services are now part of everyday life, with seven out of ten people in the UK owning a handset (source: Oftel). “We shouldn’t lose sight of the fact that mobile phones have changed people’s lives for the better,” says a spokesman from network operator O2.

This is why Willis believes a consumer backlash is unlikely: “But it doesn’t help to move the public on and mobile phone operators need to attract new business,” he points out. Certainly, the operators were quick to use the Stewart report as support for a continued network roll-out.

Some precautionary steps were adopted, such as the Ten Commitments best practice, which includes standards on the levels of emissions from mobile phones and transmission sites and the supply of information to customers. Most mobile phone operators have also increased the number of community liaison officers, who are responsible for telling the public about site plans.

Operators have played a major role in funding three years of research in the UK, paying half of the &£7.36m cost, according to the Mobile Telecommunications Advisory Group. But despite such initiatives, consumers and lobby groups, including Mast Sanity and Mast Action UK, remain wary. Claims that masts have been hidden or camouflaged to minimise their visual impact have fallen on deaf ears.

More openness and communication is needed in the industry. “People often ask why they need a mast,” says an Orange spokeswoman. “They don’t understand that a phone needs a mast to work.”

At the same time, consumer fears need to be taken into account. “When you see people acting as spokesmen, they come across like the tobacco industry saying that nothing has been proved,” says Jeremy Green, principal analyst for wireless at research company Ovum. “But it’s not about proof, it’s about reassurance.”

Until there is any conclusive evidence, users will have to weigh up the risks they are prepared to take. And operators are likely to come under more fire from consumers who remain sceptical that they have all the facts before them.