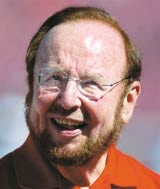 Manchester United FC could end up selling the naming rights to its Old Trafford stadium under new owner Malcolm Glazer, the US businessman, whom fans fear will rip the heart and soul out of the club and hike ticket prices.

The renaming of the ground, although lucrative for the club, is unlikely to find favour with fans, some of whom have already called for a boycott on products sold by sponsors Nike, Vodafone, Budweiser and Audi. Any sponsor that puts its name to Man United’s stadium could also find its brand under attack.

So far it has not stopped the Florida billionaire, who also owns American football team the Tampa Bay Buccaneers. Glazer seized control of the English club last week by buying out racehorse tycoons John Magnier and JP McManus to become the majority shareholder. Then on Monday he announced that he had managed to secure a 75 per cent stake in Man United, giving him full control of the club and enabling him to delist its shares from the stock exchange.

But fans have vowed to continue the campaign against the takeover, which will take the debt-free club into the red.

Ben Wells, account director at sponsorship consultancy Redmandarin, says: “This could have a major impact on the sponsors. They sponsor Man United because the club influences people’s buying decisions and they don’t want this sort of trouble. If it continues, and it looks like it will, it might get to the point where they think about throwing in the towel.”

However, Cameron Day, new projects director at sponsorship consultancy The Works, says: “There may be a slight backlash but it’s not going to make a massive difference. Man United is the world’s number one club and that’s not going to change overnight. Malcolm Glazer is not going to cripple the club financially. He’s a successful businessman.”

Valuation specialist Brand Finance suggests Glazer has overpaid for the club by almost £100m. If that is the case then there will be even more pressure on Glazer to enhance revenue streams and strengthen the Man United brand globally. One possibility is selling the naming rights to the club’s Old Trafford stadium to a corporate sponsor. Arsenal last year signed a £100m deal with airline Emirates that included the naming rights to its new stadium.

But others are not so convinced. Managing director of sports sponsorship agency Connexus, Alastair Macdonald, says: “It’s one thing to sell the naming rights to a new stadium, and quite another changing the name of an existing one like Old Trafford, which has been called that for years.”

Some experts believe Glazer will want to negotiate the club’s television rights independently from The Premier League, which currently oversees the distribution of money made from TV coverage. But to change the system Glazer would need the support of another 13 clubs. It is also expected that Glazer will put up ticket prices to bring them in line with other Premiership clubs.

Man United took £173m in turnover last year split evenly between income from the stadium, TV and media rights, and commercial operations. Part of it came from kit supplier Nike, which has a 13-year deal worth £303m, and from kit sponsor Vodafone, which paid £36m for a four-year deal.

So far the club and its sponsors have put on a show of unity over the takeover. A statement from Vodafone says: “We have an excellent long-term relationship with Manchester United and we look forward to discussing the development of this relationship over the coming weeks and months.”

But with more than £500m of debt and a promise of £100m to invest in players over the next five years, Glazer will have to ruthlessly exploit revenue streams. Despite the fans’ best efforts, major changes look inevitable.