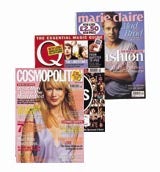 Every six months the magazine industry bursts into frantic activity, plotting a spate of culls, closures, relaunches and revamps to counteract any falls in circulation that have yet to officially come to light. With the latest set of figures from the Audit Bureau of Circulations (ABC) due out on August 12, the past few weeks have been no exception. So most media agencies and advertisers now have a good idea of which magazines managed to attract new readers and which did not in the first six months of 2004.

Many magazines have not performed as well as the publishers would have liked and are being overhauled. IPC Media confirmed last week that it is reducing the size of its flagship title Marie Claire, and cutting its cover price by 50p to £2.50 in response to flagging circulation (MW June 24); EMAP is revamping men’s title FHM and music mag Q (MW July 22); and the National Magazine Company has appointed an ad agency to relaunch flagship title Cosmopolitan (MW June 10). But it is not all bad news: CondÃ© Nast will be using publication of the new ABCs to flag up the forthcoming launch of an older women’s title, Easy Living (MW May 6).

All this activity is, in part, designed to provide a distraction from the final circulation figures and to show that action is already being taken to turn the tide on those magazines that have been struggling.

But advertisers and buyers claim that instead of allowing news to leak out piecemeal, publishers should be more transparent about the performance of their magazines by publishing monthly figures and splitting out bulks and discounted sales from the headline circulation figures.

They have become increasingly frustrated with publishers who have been forced to restate their circulation figures owing to misinterpretation of ABC rules. Earlier this year, NatMags’ Cosmopolitan and Esquire magazines were forced to reissue circulation figures for July to December 2003, after it was found that the publisher had overstated the number of magazines sold at full price on newsstands. Cosmo was asked to reclassify 14,340 copies as discounted sales, while 2,141 copies of Esquire were also reclassified and moved from “bulk” to “monitored free”.

NatMags and EMAP have also both been asked to reissue figures after it was found that they had been flouting rules preventing the inclusion of a number of magazines, most of which were distributed free with national and regional newspapers, in headline circulation figures.

When NatMags was requested to reissue circulation statements for nine key titles in 2003, managing director Duncan Edwards reportedly said that the ABC rules were very “complex and unclear”. Natmags made an unsuccessful three-month appeal against the reissue. Rival EMAP faced similar ABC restatements in 2002, following which it announced that it would exclude all bulk sales from its headline circulation figures and only include newsstand and single subscription sales.

Instances of this sort, say media buyers, call into question the integrity of the ABC system. Nevertheless, they say they have little choice but to use the ABC data as the main trading currency, alongside the National Readership Survey (NRS).

MediaCom press director Steve Goodman, who has been lobbying for ABC’s data to provide more detail, says: “Though ABC is the most important tool we have for trading, we still have to use the figures with caution because it does not present a full picture.”

Goodman is also calling for monthly data and for headline circulation figures to include only actively bought copies. With regard to copies that are given away free, he would like to see these split into two sets in order to distinguish between those left in hotel lobbies that are unlikely to be heavily read and those distributed on aeroplanes and carefully targeted.

He would also like EMAP to again start to include bulks in its data, so that buyers can place some sort of value on sample copies and magazines that are given away free.

One industry insider says that publishers do not want monthly figures to be published, because it would highlight issue-by-issue variations in circulation, opening up the market to seasonal pricing.

CondÃ© Nast managing director Nicholas Coleridge defends the current ABC system and says that it provides an “incredible amount of detail” already. He adds: “It is all about costs. If we get all our titles audited every month, it will increase the costs incurred by publishers by ten to 15 per cent and those costs will have to be passed on to clients.”

But advertisers such as Procter &amp; Gamble associate director of UK media Bernard Balderston, who has been a member of the ABC Council for three years, insist that the issue of transparency of ABC data has become a major concern. He says: “This is not a criticism, but the ABC data produced is less than helpful to advertisers, because it is produced on an average basis.

“When I buy space on television, I know exactly what I’m paying for: I get second-by-second data on all our TV campaigns, and I need the same level of information with magazines. I see no reason why I can’t get a fuller picture, though undoubtedly it would change the way of trading and maybe even put the publishers at a disadvantage.”

While ABC figures continue to be published biannually, Zenith Optimedia press buyer Stuart Mays says there will always be “a shroud of suspicion”. But for some advertisers, with seasonal needs, he claims monthly data would have little effect. Fashion brands, for instance, target the glossies in the spring and autumn.

Mays believes that the ABC should provide additional data on how issues that have been heavily promoted or have carried a particular cover mount have performed.

But a spokesman for the ABC says that the way circulation figures are presented to the industry is not about to change.

Although the ABC polices the magazine industry, it relies on numerous committees made up of a mixture of publishers, media buyers and advertisers to propose changes that then need to be considered by the full ABC Council. One industry insider claims that, because all the different parties are represented at the various stages, agreement is rarely reached and few changes get through.

ABC chief executive Chris Boyd says: “The ABC system has changed a lot in the past couple of years, keeping up with the times. We are always listening to what the industry wants. Our job is to deliver what the Council puts forward.”

So for the time being at least, advertisers and buyers will have to content themselves with the twice-yearly spin that characterises the announcement of magazine ABC figures if they are to glean any early indications of how titles are performing.