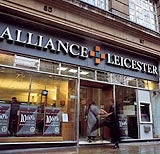 The British banking sector has come under fierce attack on a number of fronts in recent months – from Internet start-ups to City indifference – but it is the demutualised building societies which seem to be suffering most.

The Alliance &amp; Leicester (A&L), which demutualised in 1997, has been one of the hardest hit – most recently by rival HSBC’s decision to slash its variable mortgage rate by one per cent.

Despite the house-buying boom, most observers expect A&L to show a loss of new mortgage business market share when it announces its results at the end of this week.

One City analyst says: “The UK banking sector is poised to enter a major price war, fuelled in part by Internet banks. A&L is not in a strong enough position to cope with that, and it is difficult to see where it will build its revenue.”

Another analyst comments: “If A&L can’t attract more customers in the middle of a housing market boom, what chance will it have when the slowdown begins in the coming months?”

Since demutualisation, the company – which has 320 UK branches, offers telephone and postal banking and owns Girobank – has moved into the unsecured loans sector. It also plans to launch a standalone Net bank, details of which are expected to be announced on June 21.

A&L’s consumer credit business, where the margins – and risks – are higher, has been growing at a rate of 30 per cent a year and provided more than a third of its income from interest payments last year. But this operation has also been hit, with growth expected to halve.

Yet most analysts agree that the company’s biggest problem is its lack of current account customers. “Like many of the demutualised building societies, A&L still relies heavily on the mortgage market. It has not attracted enough current accounts to turn itself into a viable banking business.”

A&L even has 68,000 members who have yet to claim their free shares, now worth more than &£100m following its flotation.

But the appointment in May of managing director Peter McNamara, former head of personal banking at Lloyds TSB, is a clear signal that A&L has recognised its Achilles heel.

McNamara replaced Peter White, who was ousted following an aborted merger with Bank of Ireland, and has responsibility for day-to-day operations. Chief executive John Windeler takes on White’s other responsibilities.

McNamara hasn’t wasted any time making his mark. Last week, he raided his former company to poach marketing director for personal banking Graham Pilkington, who is understood to be joining A&L next month (MW last week).

The move has surprised many in the industry and throws the role of A&L strategic marketing director Tim Pile into doubt.

One agency source says: “Pile and his team are well-respected marketers – most of them have worked for banks. It is difficult to see how Pilkington could improve things – it could be a case of McNamara bringing his own people in – but his track-record at Lloyds will have been a crucial factor.”

A marketing director at one of A&L’s rivals says: “McNamara has moved into a whole new area and he probably wants people who he knows around him. Pilkington is not a high-profile figure but he has a good strategic brain, and has done well at Lloyds TSB.”

Pilkington and Pile were both unavailable for comment as Marketing Week went to press.

Pile has been head of marketing since 1996, after quitting Lloyds TSB when he failed to secure the top marketing role in the newly-merged operation. During his tenure, the company has done little TV advertising and instead relied heavily on direct marketing (DM) through Barraclough Hall Woolston Gray and Brann.

The ad account, held by BMP, has been virtually dormant for two years – the last major TV campaign having been launched in April 1998. The commercial starred Fast Show comedian Simon Daye with two groups of enthusiasts – Morris dancers and trainspotters – and carried the catchline “Alliance &amp; Leicester. Common-sense in a crazy world.”

One agency source says: “A&L seems to believe it has already established a strong brand through the Hugh Laurie and Stephen Fry ads of the mid-Nineties, and to a certain extent that’s true. But how can it expect to attract more customers and compete with the likes of Barclays and NatWest in attracting current accounts if it doesn’t advertise?

“DM is good for cross-selling other products, but it is an unproven medium when it comes to recruiting customers.”

This DM-led marketing strategy could be about to change, as A&L is known to have briefed a number of ad agencies about a new project.

The company is believed to be looking at new ways to market itself and considering its future direction, although this is not thought to involve developing a strategy for its Net operation.

A&L’s strategy may become clearer later this week, but few observers believe marketing alone will be enough to stave off the inevitable. They suggest it succumb to a takeover.

One analyst says: “When White left, many in the City thought it would turn itself into a lean business, making it more attractive to potential suitors. That has not happened.

“It has a three-year takeover protection clause following its demutualisation and that expires next year. I wouldn’t be surprised to see another bank swooping in.”

Pile, Pilkington and the marketing team will have their work cut out to ensure it doesn’t cede further ground to its rivals.