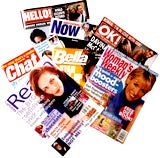 The market for women’s weekly magazines has been in the doldrums for some time, with only the celebrity-based titles garnering circulation increases and positive headlines.

It is therefore no surprise to find that IPC Media, the major player in the women’s weekly market, is to axe its worst-performing title, Woman’s Realm, and merge it with sister publication Woman’s Weekly (MW April 19).

Woman’s Realm’s circulation dropped 15.2 per cent year on year to 152,053 for the period June to December 2000, according to the latest figures from the Audit Bureau of Circulations. But Woman’s Realm was not alone. H Bauer’s Take a Break and Bella, IPC’s Woman’s Own and National Magazine Company’s Best all saw significant declines in their circulation figures. On the other hand, celebrity titles Hello!, Northern &amp; Shell’s OK!, IPC’s Now and EMAP’s Heat, as well as H Bauer’s That’s Life all recorded rises in circulation, perhaps reflecting a growth in “celebrity culture”.

In an attempt to revitalise the women’s weekly sector, and to strengthen its own position as market leader, IPC has launched Your Life, claiming it is like “no other magazine seen before, or currently available in the sector”. Aimed at the modern mature woman, aged over 35, who falls within the ABC1 target market, the magazine provides a mix of news, health advice, general features and tips on homes and gardening. Priced at &£1.20 with an introductory offer of 75p, the title has been launched with an initial print-run of 700,000 and a sales target of 200,000.

Industry insiders say that the launch, which was given approval by the IPC board only a month ago, is exceptionally speedy for a company generally known to be a cautious player.

The launch of Your Life comes just weeks after H Bauer’s Real magazine hit the newsstands priced at &£1.50 with an initial print run of 900,000 and a guaranteed circulation for buyers of 300,000. The fortnightly title is aimed at women in the 25to 40-year-old age group.

Both Real and Your Life have launched into a cluttered market, once the undisputed territory of IPC. The publisher’s hold on the women’s weekly market first came under serious pressure in the mid-Eighties, with the arrival in the UK of German publishers Gruner &amp; Jahr and H Bauer.

IPC responded by revamping its titles and pouring money into marketing. Although the sector has been further stimulated with the launch of a series of celebrity titles, the general women’s weeklies have had a relatively tough time in circulation terms in recent years.

Research conducted in 1998 by IPC Connect, the IPC division which is responsible for women’s weeklies, identified “prime-time” women as those aged over 35 – a sector with a combined personal income of almost &£100bn a year. It is that market which the company now wants to tap with the launch of Your Life.

One industry insider, however, says that the new magazine is little more than a revamp of Woman’s Realm, which because of its association with cookery and crochet was unable to shed its dowdy image.

Ian Rockett, business director in the press buying department of MindShare, says: “Woman’s Realm was not capturing a huge market share and this must have frustrated IPC, which had identified a lucrative market for the magazine. And I think that a market opportunity does exist with the launch of Your Life, but the magazine will possibly be more mass-market than IPC is implying.”

Women’s weeklies still remain one of the most lucrative sectors of the magazine industry. Linda Lancaster-Gaye, managing director of IPC Connect, points out that women buy 7.5 million of these magazines a week, generating over &£5m a week in retail revenue. She claims that sales of IPC Connect’s Woman and Woman’s Own total 1.2 million copies each week.

Lancaster-Gaye says: “Woman’s Realm was launched when the women’s weekly market was at a certain stage of development. The market has now moved on and so have the women. But what is important is that the market is still huge, and the new launch will both generate and stimulate further growth.”

Simon Kippin, publisher of NatMags’ Glamour, is intrigued by the launch of Your Life into a market where most magazines offer “a similar editorial diet and a little innovation”. He says: “Your Life is interesting in the sense that it is attempting to ‘break the mould’ and offer news and content which is not completely reliant on celebrities. But because newspapers cover most stories on a daily and weekly basis, I have my doubts as to its likely success in achieving big sales. There is also the H Bauer launch of Real to contend with.”

Duncan Edward, deputy managing director of NatMags, agrees. “It is quite interesting that both Real and Your Life have launched at similar times.”

NatMags entered the women’s weekly market for the first time last year with the acquisition of Gruner &amp; Jahr’s UK interests, which include Best. The title – which saw its circulation fall 8.6 per cent year-on-year to 431,352 in the last ABCs – is to undergo a major redesign later this year.

IPC is returning to its roots with the launch of Your Life, but it remains to be seen whether the publisher is able to revitalise the general women’s weeklies sector.

It’s not very often an ad creates a star, but Halifax’s “Sex Bomb” execution has done just that. When Halifax employee Howard Brown appeared in the ad, singing said song, with lyrics adapted by the building society’s creative agency Delaney Lund Knox Warren, it seems many female viewers were turned on to more than his […]