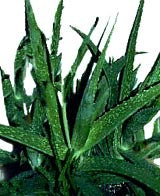 Aloe vera has been used for thousands of years in folk medicines to heal wounds and treat burns, but it has become branding shorthand to show that products are “kind” to the skin.

As a result of worries about the irritant effects of products that come into contact with the skin – from toilet roll to shampoo – manufacturers are looking for a way to reassure customers that their brands won’t bring them out in a rash. But in the same way that the Food Standards Agency has decreed that organic produce is no better than non-organic, some observers are wondering whether the increasing use of aloe vera is little more than hype, lapped up by consumers who know no better.

Over the past year, household giants have adopted the “wonder plant” to spice up their brands. Kimberly-Clark has launched an Andrex toilet paper variant containing aloe vera, and Lever FabergÃ© has introduced a Persil Aloe Vera sub-brand.

The launch comes after fears that the increased use of soaps and detergents in modern society could be a trigger for eczema in children. According to the University of Sheffield’s dermatology team, the use of shampoos and soaps may be responsible for the huge growth in eczema over the past 30 years. Eczema sufferers lack fat around their skin cells. This allows water to leak out – leaving the skin hard, dry and irritable – and also allows irritants to enter.

In April, a number of Members of the European Parliament called for baby wipes to be banned until their safety could be assured. However, European Union Commissioner for health and consumer protection David Byrne said there was no need to ban the products, because the ingredients were already covered by EU directives which force companies to ensure their products are safe.

According to Andrex marketing manager Allister Frost, the aloe vera version of the toilet tissue has been received well by consumers. He claims that it now takes 1.3 per cent of the £1bn toilet paper market, with sales of well over £10m. He is in no doubt that consumers associate aloe vera with skin protection.

He says: “When we looked at possible additives, aloe vera came out best, with lots of positive associations. People are looking for something that cleans and protects them.” As to what evidence there is that aloe vera is beneficial in toilet tissue, Frost says the product “will have been checked by the required authorities”.

But while consumers may have warm feelings towards aloe vera, some doubt that it offers any real benefits when used in small doses in products. The Persil aloe vera variant, for instance, contains a fairly low dose of the plant extract. One industry observer says: “Aloe vera is known for its healing, soothing and moisturising properties, so flagging it up in consumer products is a motivating concept and helps to create interest. But I do not think the inclusion of a certain amount of aloe vera (in most cases very small amounts) in loo rolls or detergent powders provides any direct or real benefit to the consumer. It is questionable how something like aloe vera would work in a detergent brand. Detergents themselves are classified as irritants, so I wonder how the inclusion of aloe vera helps. It is not very convincing.”

But Lever FabergÃ© insists that Persil Aloe Vera has significant advantages in terms of skin care. It says it has carried out clinical research on 7,000 people. According to the company: “The real breakthrough was developing this milder formulation while retaining Persil’s unbeatable non-biological cleaning performance.” Non-biological detergents are intended to offer strong cleaning properties but with fewer of the ingredients that can irritate the skin. This raises the question of why the aloe vera version is necessary.

Paula Marie, general secretary of the Government-recognised British Complementary Medicine Association, says: “The amount of aloe vera in there is going to be small. I would say it is a gimmick – all it does is reduce the reaction to the detergent, it does not make the detergent safer.”

A Lever Brothers spokesman says Persil Aloe Vera’s “kindness” to skin is down to “the formulation as a whole, and not due to one specific ingredient. Our tests prove it is unbeatable on cleaning and care.”

Lever Brothers’ research into skincare has been accredited by the British Skin Foundation (a charity which Lever funds), though director Matthew Patey insists this does not mean the BSF is in any way endorsing the product.

Lever FabergÃ© says the non-biological sector now accounts for over 30 per cent of detergent sales, and that its research shows that one in four people believe they have sensitive skin. In a statement, the company says: “With the rise in the cases of reported skin sensitivity and the trend towards using natural ingredients, the challenge was set to develop a product incorporating a natural ingredient which was not only kinder to skin but that didn’t compromise on effective cleaning.”

It is difficult to avoid the commoditisation of the household goods category, which is widely perceived as dull. Aloe vera has helped out for the time being, though brands could do more to explain the benefits of the additive, rather than depending on a warm feeling of goodwill and vague “kind to the skin” references. The search continues for new ways of creating interest.