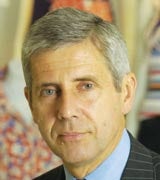 Marks &amp; Spencer’s sales and profits are plummeting, as revealed this week by chief executive Stuart Rose, but the changes he is putting in place could be just what the retailer needs to get back on track, according to analysts.

All eyes will be on the performance of the autumn range and sales in the run-up to Christmas, when Rose’s recovery plan will be in full swing. It will be the first time head of womenswear Kate Bostock, brought in from clothing brand George at Asda, will have full responsibility for fashion lines.

The company’s financial results for the 12 months to April announced this week show UK like-for-like sales down by over five per cent compared with the year before, while clothing market share fell by 0.5 percentage points to 10.5 per cent. Group profit before tax and exceptional items plunged 19 per cent to £618.5m as UK retail sales fell 1.7 per cent to £7.03bn. The chain says womenswear and lingerie sales were disappointing, blaming “over-complex” ranges. But with tough trading on the high street, this is a difficult time for M&S to stage a comeback.

Even so, Rose is bringing some hard-nosed retail skills to the shop floor, and some see his approach as a stark contrast to that of the previous management. His predecessor Roger Holmes was criticised for over-reliance on management consultants, and a lack of basic merchandising and marketing nous.

The chain’s priority is to get fashionable items in stores at competitive prices. It is seeking to reduce stock sold on promotion by improving the speed to market of its latest designs. “I always knew it was going to be a tough job, but as time goes on I am more convinced we can do it,” he told journalists at the conference.

M&S is attempting to tidy up its cluttered store interiors, slashing its sub-brands and cutting down on the number of lines it stocks. In menswear, it is cutting back its sub-brands to just three – Autograph, Blue Harbour and Collezione. In lingerie, it is axeing five sub-brands and concentrating on Adored, Body, Ceriso and Truly You. The total number of products is being reduced by up to one-fifth.

According to Panmure Gordon analyst Justin Scarborough: “Its achievements on targets are predicated on like-for-like sales coming through in clothing, but that is a big call.” He says that at least M&S finally has a management team that recognises the errors of the past six years in pricing, branding, choice and cost control. “It is addressing the basics. If it hadn’t, there would be greater concern,” he adds.