“I believe, to my core, that everybody has the potential to be creative – whatever form that creativity takes – and that to encourage such development is a noble thing,” says president of Pixar and Disney Animation Ed Catmull in a new book, Creativity, Inc.

“More interesting to me, though, are the blocks that get in the way, often without us noticing, and hinder the creativity that resides within any thriving company.”

Catmull, a co-founder of the Pixar studio together with Steve Jobs and John Lasseter, uses the book to describe the transformative potential of creativity within organisations. He argues that managers must “loosen the controls, not tighten them” and “pay attention to and engage with anything that creates fear” in their companies in order to establish creative working cultures.

The advice is timely given that new research, seen exclusively by Marketing Week , finds that less than half of UK employees feel that their working culture is geared towards creativity.

Although 78 per cent of employees regard creative thought to be important to the success of their organisation, only 46 per cent agree that they are encouraged to think creatively at work, finds the study by brand experience agency Jack Morton Worldwide. 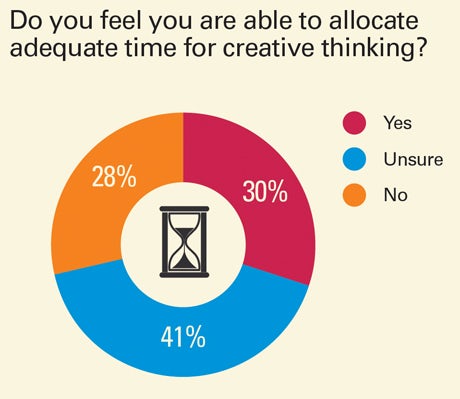 The survey of more than 1,000 employees across various functions including marketing finds that 30 per cent feel their company does not formally reward creativity, while 23 per cent say their business does not allow them the ‘freedom to fail’.

Despite these concerns, most employees (72 per cent) feel that creativity is an important route to success in their role. In addition, 45 per cent say that the opportunity to work in a company that encourages creative thinking would be a key motivator in accepting a new position, while 66 per cent believe that people can learn to think creatively and are not just born with inherently creative skills.

Tim Leighton, joint head of creative at Jack Morton Worldwide, suggests that many businesses are still trapped in an “industrial revolution way of thinking” whereby their strategies are process-driven and geared around productivity, rather than creative approaches to new problems.

“The difference between what’s going on in corporate culture versus the demand from employees is surprising and fascinating,” he says. “The workforce understands the challenges of today’s world and the fact that they need to be creative in order to address those challenges. The onus now is on corporate culture to catch up with this perception.”

Looking specifically at working practices, 22 per cent of employees say that their company’s physical working environment does not provide the space and inspiration for creative thought, while 23 per cent believe they are not encouraged to hold spontaneous meetings and discussions. 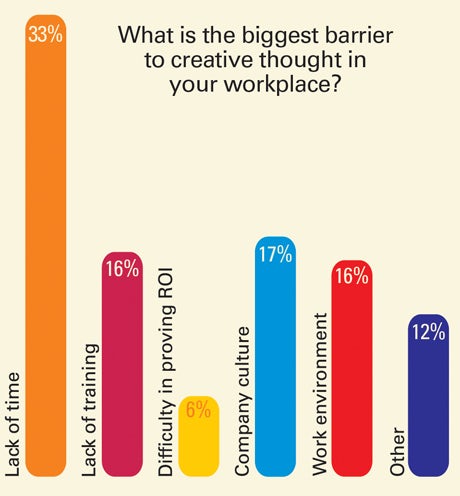 Around a third of employees (30 per cent) say that their organisation’s main method of idea creation is brainstorms – a practice that Leighton believes is outdated and counter-intuitive. “Brainstorming simply reinforces the myth that creativity can be taken out of a box at a special place and time,” he says.

“It has become a byword for a rather bizarre meeting that makes everyone feel slightly better about their jobs but that doesn’t actually achieve much and that doesn’t fuel creativity within a business on a daily basis.”

Paul D’Arcy, senior vice-president of marketing at jobs website Indeed.com, seeks to encourage a more organic approach to creativity within his business by removing the “layers of approval” needed for decision making and by empowering staff with data and insight tools. While he takes a lead in setting the strategy and objectives of different projects, he also empowers employees to come up with their own creative solutions.

“As long as something fits with the strategy, the default answer is often going to be yes and not no,” he says. “An environment where no is the answer or where the highest paid person’s ideas always come first never leads to strong creativity.”

Last month, Indeed.com launched its first TV advertising campaign in the UK in which jobseekers appeared as the actors in the spot, carrying out different jobs beside huge letters from the company logo. D’Arcy notes that the internal team that worked on the campaign was kept deliberately small to avoid stifling the creative ideas behind it. 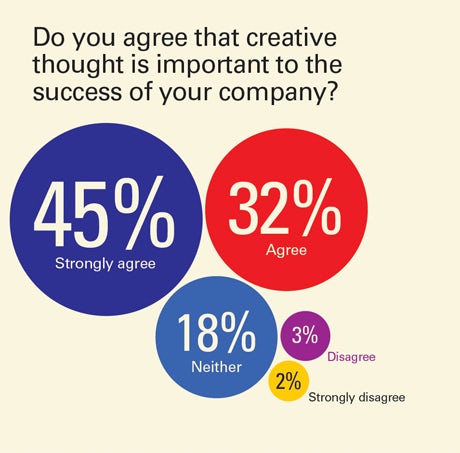 “The more that things look like a committee, the worse the result is going to be,” he argues. “A very narrow leadership team was engaged with the campaign process all the way, meaning there were fewer people who could say no or get in the way of the creative path.”

In addition to organisational structures and working practices, the research shows that time pressures often prevent employees from working more creatively. For example, 33 per cent say that a lack of time is the biggest barrier to creative thought in the workplace, while 28 per cent feel they are not able to allocate adequate time for any kind of creative thinking.

To overcome this challenge, book retailer Blackwell’s encourages its digital team to allocate time to experimentation and research and development. The company has reconfigured its business model towards digital platforms in recent years by setting up a digital development team in a separate office in Shoreditch, London with the brief of launching new products for the business.

This includes Blackwell Learning, a digital service that allows students, academics and professionals to download and annotate eBooks on any device. The product, which is also integrated with Twitter and Facebook, helped Blackwell’s win the Book Retailer of the Year award at the Bookseller Industry Awards last month.

Matthew Cashmore, digital director at Blackwell’s, explains that the digital team is given plenty of time for research and development, albeit with clear strategic goals that are set by the company board. “For the first phase of a project – a period of six months, for example – we say to the digital team in London ‘go away and play, there are no barriers, you can do anything you like’.

“At the end of that period we have to start to bring those ideas to a point and look at what we’re going to do. It means that you start to curtail the creativity and point it towards commercial reality. Once the cycle is complete you start again.” 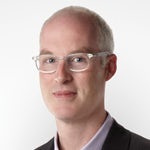 Creativity is uncomfortable territory for many leaders – it feels high risk to have new, different ideas and to go places that a company hasn’t gone before. For us creativity means being open to new ideas. An important part of that is having a working environment where ideas can come from anywhere.

Our leadership is very focused on the strategy so that when it comes to creativity and new ideas, the default answer is ‘yes’ as long as it fits with the strategy. We also focus a lot on testing. Regardless of whether an idea comes from a new employee or the chief executive, we test the ideas in the same way. If you have small teams working on projects with the ability to test them, you can bring creative ideas to market very quickly. 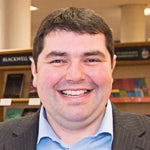 It’s important to tap the creativity that is already within a business. All digital does is amplify what you’re good at and what you’re not so good at, so if you’re bad at selling books, layering digital on just amplifies that.

Blackwell’s thought creatively as a business about how we could use digital to concentrate on what we’re good at. We set up a digital development team in Shoreditch, London consisting of many people who are not from publishing or book-selling but who are brilliant technically. We said to them ‘this is what we’re good at, go away and play’.

The team can tap into the business where it needs to but where it doesn’t have to and the traditional business might otherwise throw up some obstacles to a project, it is able to sidestep those obstacles.

Brand experience agency Jack Morton Worldwide surveyed 1,017 UK employees across 64 job functions about their views on creativity in the workplace. Respondents were asked about the impact of creative thinking on business performance and the extent to which employers encourage creativity among their staff. 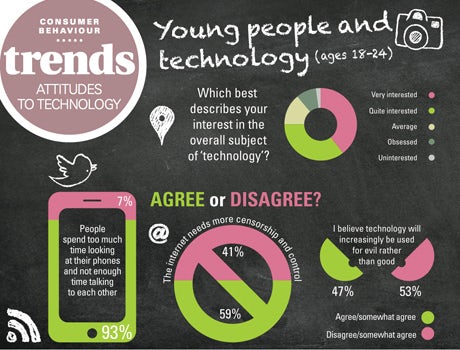 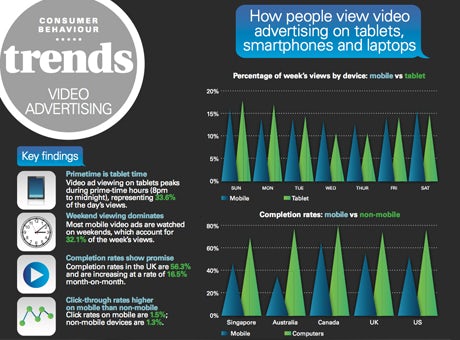 The power of video is all in the timing 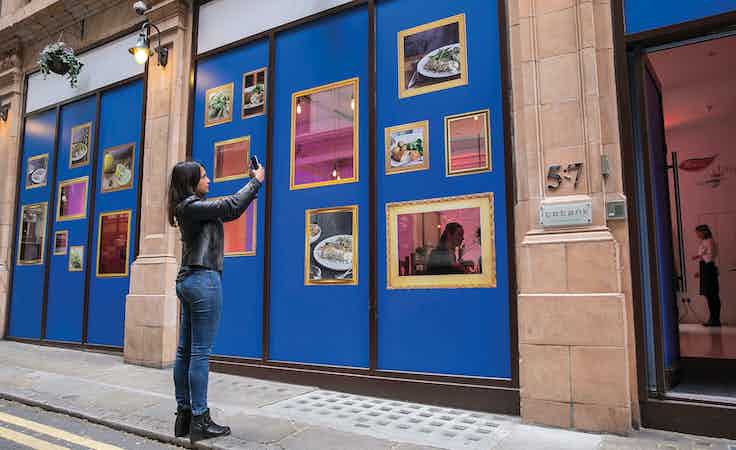 The surge in social media’s popularity has led to some brands using it dishonestly to promote their goods, but as a result the whole marketing industry is being undermined and consumers are losing trust. 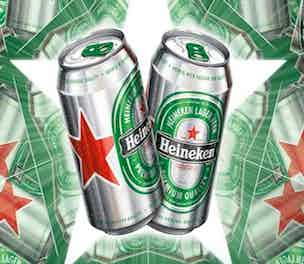 Heineken is introducing a fresh redesign to its beer cans that dials down the brand’s trademark green to emphasise the aluminium in the hope of appealing to contemporary men. 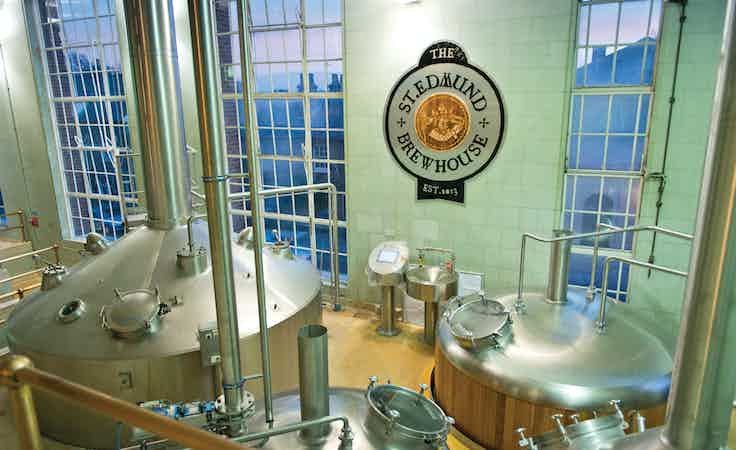 Marketers say they find new product development ‘terrifying’ but it is essential for brand success. Key brands tell how they are staying one step ahead.