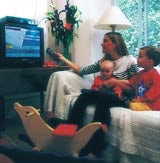 UK advertisers are to oppose a government proposal calling for a ban on food and drink advertising during pre-school children’s TV programmes and related scheduling.

The Incorporated Society of British Advertisers (ISBA) has condemned the plans, saying the existing rules on advertising to children for both broadcast and non-broadcast media are stringent enough.

The Ten-Minute Rule Bill is being proposed by Labour MP Debra Shipley, who last year laid down an Early Day Motion in the House of Commons calling for a complete ban on TV advertising to children under the age of five.

A spokesman for ISBA says: “It wouldn’t be in children’s interests to be cocooned from the commercial world in which we all live and in which advertising plays a crucial role. Also, the loss of advertising revenue could prove devastating to the quality of children’s TV.”

Although Ten-Minute Rule Bills do not become legislation, the proposal is expected to open yet another debate on food advertising to children. The new bill received its first reading on May 6.

A statement issued by Debra Shipley’s office says: “I strongly believe that toddlers should have TV time which is their own, and free from harmful advertising of high fat, high sugar and high salt content food and drink.”

While the May Day protests achieve little, it would be remiss of economists to ignore what lurks beneath the dreadlocks and violence, says George Pitcher I was mildly irritated last Thursday night to be stuck in a cab in Trafalgar Square as riot police charged up the Strand to quell a hot-spot of May Day […]

Swiss, the loss-making airline, is to spin-off its regional operations under the budget brand name Swiss Express.

Ansell Healthcare has come under fire from several city planning departments and poster contractors for an illegal flyposting campaign called “ishaggedhere.com”, for its Mates condom brand. The campaign was booked by Rocket PHD and distributed by ambient media company Diabolical Liberties, and has appeared across London as part of a campaign by the condom manufacturer […]