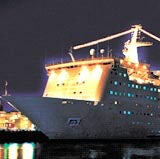 If there is an image that conjures up a holiday on a cruise ship, it is that of a middle-aged couple on deck, the man’s arm draped across his wife’s shoulder, both looking out to sea and surrounded by the glow of the setting sun.

Commonly used in brochures and other promotional material, the image reflects the fact that most cruises are favoured by people at the mature end of the age spectrum.

But one new company aims to move away from this by creating a cruise experience that will appeal to a younger audience.

The cruise market has more than trebled since 1990. But cruises remain most popular with people over the age of 50. Both companies believe there is a gap in the market for a younger type of passenger.

The first ship from Island sets sail next March from Palma, Majorca. If the concept is a success there will be more ships over the next few years to offer a wider choice of destinations.

Island will attempt to distance itself from old-school cruises by scrapping cruising traditions such as set meal times and dressing up for dinner.

In what is perceived as an industry first, the company has signed deals with partners such as Costa Coffee, fitness brand Holmes Place, and off-licence chain Oddbins. All will provide services on the ship.

Island claims that in order to attract passengers in their 30s it has had to think outside the usual remit of cruise packages.

Island marketing director Karen Gee believes the new cruise, and the way it will be marketed, will open up this younger age sector: “We held focus groups to discover what people wanted. In the case of Holmes Place, a number of people emphasised the importance of a health spa.

“We could have done this ourselves, but we felt that bringing in brands that people know was the better option.”

Gee claims the benefits of the joint venture are obvious. First Choice already caters for Island’s target market and can push the holidays through its four travel agent chains. In turn, Royal Caribbean Cruises has the experience to operate the ship.

Ad agency RPM3 has been appointed to create the advertising for the new venture. Gee says she chose an agency which had not previously worked on a cruise brand to ensure there would be no “clichÃ© advertising”.

She is adamant there will be no pictures of sunsets, or even boats, to promote the company: “Our advertising will stress that you can do as much or as little as you want on the holiday. But the really interesting thing is that the advertising will not even show the boat.”

The name of the company reflects the desire to change people’s preconceptions of this type of holiday. “We have been very careful that even in our name – Island – we do not say the word ‘Cruise’, because we believe it won’t work with this particular audience,” she says.

In 1995 Gee was part of a team that launched Airtours Cruises, a venture which she claims made the cruise market more accessible.

“Before Airtours came along, a lot of cruises were about £2,000,” she says. “We launched into the market with cruises for about £399, and offered real value for money. The whole market then exploded.”

Gee’s claims are backed up by figures from the Passenger Shipping Association, which show that in 1994 270,000 people from the UK took cruises. By 1996 that figure had leapt to 416,000. Official figures have not been released yet for last year, but early indications show the number of people taking cruises has now reached 754,416.

There has, however, been a decline in the growth of the number of UK cruise passengers, from 12 per cent in 1999 to just one per cent

P&O Cruises sales and marketing director Carol Marlow thinks the cruising market is successful enough without the need to try to target a new audience, but adds: “I can see why Island is doing it. Cruising is such a wonderful experience, I can understand why Island can see it has possibilities for a younger audience.”

Marlow says she would not “rule out” P&O doing something similar in the future.

However, she believes the marketing industry should steer clear of using age to define an audience. “Customers should not be pigeon-holed into age brackets. For cruising it is more about a way of life which appeals to all sorts of people.”

According to Marlow, one reason cruises are so popular with a more mature audience – apart from them having more disposable income – is that they offer plenty of variety without passengers having to “keep packing and unpacking.”

P&O operates three different cruise brands on 15 ships. P&O Cruises, which includes the Oriana – the platform for the yearly Marketing Forum – is aimed at a UK audience.

Swan Hellenic, which carries fewer passengers, is P&O’s premium brand, while its international brand, Princess, appeals mainly to passengers from the US – the largest market for cruises.

But even with this choice of brands, Marlow admits the average passenger is over the age of 50.

With 30 cruise companies operating in the UK market, the second largest global market for cruises, it is perhaps surprising that none of the other operators are targeting a younger market.

As the number of people in the traditional target market is set to rise, there is an element of “if it ain’t broke, don’t fix it” about the new venture. However, if Island is a success, and other companies such as P&O follow suit, then the traditional image of the middle-aged couple in the sunset on the ship’s deck, may be erased forever.