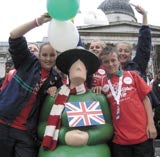 It may seem like an age ago, but it’s only a couple of weeks since most of London was busy celebrating the city’s successful bid to host the Olympics. But celebrate we did, and ad agency Isobel certainly did its bit.

The agency decided to make an early pitch for designing the London 2012 mascot by taking “Isobel” to Trafalgar Square to join in the celebrations, and convince a few hapless tourists that the statuesque lady was to be the official mascot.

Looking at Isobel, she doesn’t appear to be particularly athletic, so the Diary is assuming that she’s a javelin thrower or maybe a shot- putter, though given her lack of mobility there is always the possibility that Clive Woodward will call her up for the next British Lions tour.

Isobel (the agency, not the mascot) says that audition dates will soon be available for other hopefuls and to watch this space. It is looking for inanimate objects that will be gawped at by tourists for hours on end. Has anyone got Prince Harry’s number?