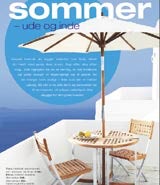 Danish furniture retailer Ilva has appointed Isobel to its advertising account, with a brief to create a launch campaign for the opening of its first three UK megastores.

Isobel, which won the account without a pitch, is believed to have courted the retailer for over a year. It is understood the chain’s management talked to other agencies before handing Isobel the business this week.

The chain, which is run by former Habitat and B&Q chief executive Martin Toogood, is planning to compete with Ikea, although it is slightly more expensive than the Swedish retailer. It has been dubbed “Ikea for adults”.

Ilva has three stores in Denmark and has been planning an aggressive launch and expansion in the UK since Toogood led a buy-out by venture capitalists Advent International two years ago.

The retailer has located sites for the three UK stores: at Manchester, Thurrock and Gateshead. The first store is expected to open at the end of this year with the others following soon after. Ilva stores occupy about 120,000 sq ft, less than half the size of the 250,000 sq ft Ikea outlets.

The store-opening campaigns are likely to use posters, door-drops of catalogues and ads in local press.

Toogood has spoken of opening up to 20 stores across the UK in the next ten years. Isobel managing partner Paul Houlding says that as more stores open, the chain will consider television advertising.