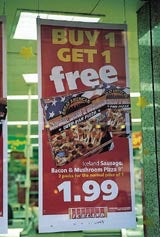 The Institute of Sales Promotion (ISP) has launched a campaign to save “buy one get one free” (bogof) offers and other promotions from the threat of European legislation.

The ISP claims the European Commission is planning to outlaw some of the UK’s most popular promotion techniques, including “bogofs”, prize draws and other in-store promotions.

Earlier this year, some members of the Commission’s Expert Group on commercial communication – made up of officials from the 15 member states – recommended harmonising legislation on discounts and coupons across Europe.

The ISP believes this will trigger a tightening of regulations in the UK, which has one of the most liberal sales promotion regimes in Europe.

The Expert Group is now looking at “bogofs” and free draws. The next stage is for the Commission to draw up a draft directive. This will then be considered by the Council of Ministers, which has legislative powers.

The toughest regime is in Germany, where “bogofs” are outlawed, on the grounds that they encourage consumers to buy items they don’t want. Other techniques are also strictly regulated.

ISP Europe director David Croydon says: “This could represent a threat to the sales promotion industry as we know it in the UK.

“It might change the whole basis of sales promotion. The threat is certainly there, and we need to tell people about it and mobilise against it,” he adds.

The ISP is contacting European trade associations about the issue and encouraging its members to lobby Brussels. It has also set out its case to the EC Commissioner for the internal market.