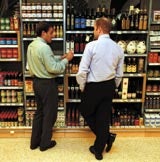 Although retail staff are as happy to help as ten years ago, a mystery shopping study revealed that product knowledge is lacking, while a friendly attempt to meet your needs rates higher than slick ads

Everyone remembers an instance of bad customer service, not least over the Christmas and sales periods – staff who seemingly have no idea where the item you want is situated, or surly and impudent service at the counter. So why is customer service getting worse?

Grass Roots recently completed its second mystery shopping study in ten years, Are You Being Served?, that investigated customer service, using 1,775 mystery shopper visits across a range of retail sectors. The research shows that staff are equally ready and willing to help as they were ten years ago, but less able to provide good customer service.

The only major difference between the 1995 and 2005 surveys was that some significant retail sectors had disappeared (utilities showrooms, for instance) and others had appeared (coffee shops and mobile phone outlets) in the meantime.

The single biggest change over the past ten years is that fewer staff have the product knowledge customers expect (down from 85.0 per cent to 78.0 per cent). This may be due to higher expectations, and the great service dilemma is to balance what customers would like to have against what they are prepared to pay for.

The biggest mover in the other direction was friendliness, up to 85.9 per cent from 80.0 per cent. Otherwise, fluctuations were relatively minor, with some aspects of customer service getting slightly better (eye contact, helpfulness) and others getting slightly worse (smile, politeness). Overall, there was little difference in what men and women reported, but male mystery shoppers gave distinctly better marks to chemists and coffee shops, while women reported much more favourably on travel agents.

Moving to the specifics of the 2005 survey, the key findings are that estate agents were deemed best at providing good customer service, followed by chemists and travel agents. Those that fared worst were fast-food outlets, DIY stores and supermarkets.

Digging deeper, personal contact had the greatest influence on customers’ intentions – how staff greeted them, how well they met customers’ needs and how happy they seemed to help were much more influential reasons than anything to do with the environment or waiting time, even though the latter was given the equal lowest rating of 73.6 per cent when individual events were scored. (The other aspect with this low score was meeting needs, giving further support to the idea of a knowledge gap.)

Retailers have experienced changes in legislation (disability, data protection, financial selling) and are faced with customers who know their rights and how to secure them. As a result, many have focused on eliminating the negative, but they must also accentuate the positive.

As we know, consumers do business as much with people as they do with institutions or brands. The slickest advertising and creative surroundings can only be effective if the customer experience lives up to the expectations they create. Retailers would do well to remember that marketing is not just about creating brand awareness; it is the entire customer experience.

Are You Being Served? shows where there is clear room for improvement: the 25.9 per cent of staff who did not smile, the 26.4 per cent who did not meet customers’ needs and the 25.8 per cent who failed to give a friendly comment once the transaction was complete and the customer was leaving. Above all, companies should ensure that staff have a level of product knowledge that their customers expect.