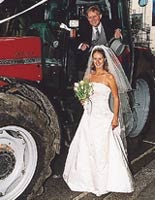 Everybody loves a wedding, and everyone loves looking at the wedding photos. So let the Diary be the first to show you the wedding pictures from National Magazine Company managing director Terry Mansfield’s marriage last week.

Mansfield’s wedding will come as a surprise to many, not least Mrs Mansfield, to whom he has been happily married for several years. The choice of carriage – a gleaming Massey Ferguson – is also an eyebrow raiser.

It was of course a PR stunt to promote ITV1’s programme Farmer Wants a Wife, made in conjunction with Country Living Magazine.

Zenith Media, MediaCom and MindShare were all treated to a visit from the bride and groom. One media source says: “I can’t believe Mansfield gets paid vast amounts of money to mess around all day. That’s our job.”

The ad industry has had a tough year – all too apparent in the drop in entries to this year’s IPA business advertising awards. But it has meant that the independents, often overshadowed by the major players, had a greater share of the limeligh

Which DM agencies have fared well? Have any bombed out of the market altogether? David Reed reveals all in this year’s Direct Marketing Agencies Reputation Survey and reports on the effects of agency consolidation and a slowing economy

The EC Green Paper on consumer protection has come under fire for not being wide-ranging enough. The solution is for government to talk to the ad industry itself and reach a compromise, says John Shannon