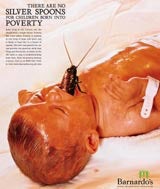 Since the early Eighties, consumers have been exposed to a tidal wave of shock advertising. However, there is an increasing feeling across the advertising industry that this technique has grown stale. It has been suggested that modern consumers have overdosed on shocking imagery and advertisers must find new ways of driving their messages home.

Consumer research company QuickWise has conducted research into the reactions of consumers to potentially shocking campaigns to find out whether such campaigns really have reached saturation point. Only 27 per cent of respondents believe that shock advertising has become stale, but on the whole there is a feeling that the subject matter must warrant using such tactics.

The research shows that the idea behind a campaign using shock tactics has to be easy to understand if it is to have an effect on consumers. For this reason, the Department of Transport’s drink-driving ad, which depicts an “accident” in a pub, was the highest-rated ad in the survey, with 85 per cent believing it is effective. Another government campaign – the anti-smoking ads showing how fat builds up in the arteries – came in a close second, with 84 per cent rating it highly.

Seventy per cent of respondents said the Barnardo’s child poverty campaign was effective, while 49 per cent rated a Gossard campaign, featuring scantily clad women and sexual innuendo, highly. The Government’s “Safe Sex Lottery” campaign was seen as effective by 47 per cent, but just 30 per cent said the same of Benetton’s 1996 “Heart” ad, which showed three human hearts with the words white, black and yellow.

The survey also suggests that consumers are unsure about plans to start putting “drink in moderation” health warnings on bottled beers. Of the mere 32 per cent of respondents who were aware of the initiative, only 17 per cent thought that it was likely to have an impact.

QuickWise also asked respondents how shocking they found various campaigns. More than a third (38 per cent) still think the Benetton Heart campaign is shocking. On the other hand, the survey found that last year’s Barnardo’s child poverty campaign was considered particularly shocking: nine out of ten respondents said that they found it disturbing. The drink-drive “pub accident” campaign was deemed to be shocking by 88 per cent of respondents.

Perhaps unsurprisingly, given the more serious nature of some of the other nature of the other campaigns, a Gossard campaign showing a scantily clad woman saying that, if she wants something rough on her chest, she’ll get a man, was found shocking by just five per cent of respondents.

The Government’s sexual health campaign, the Safe Sex Lottery, appeared to lose out in the shock stakes – only 18 per cent of people found it shocking. The latest execution in this campaign presents the audience with a Seventies postcard image of a holiday camp competition: the strapline says that the winner of the “biggest pair” competition is Dave, with gonorrhoea. The research suggests that the use of humour has cushioned much of the shock factor.

The survey highlights a strong connection between the shock factor of a campaign and its overall effectiveness: as a result of the humorous, rather than shocking, nature of the Safe Sex Lottery executions, only 47 per cent believe the campaign is good at getting its message across.

The overall comprehension rate for this campaign appears, at first sight, to be healthy, with 66 per cent of respondents understanding it. But again, when compared with the other campaigns, this is quite low. The survey shows that 96 per cent of people understand the anti-smoking campaign, and 91 per cent the message in the drink-driving execution. Almost three-quarters (74 per cent) understand the Barnardo’s child poverty ads, and 72 per cent understand the idea behind the Gossard ads. The only campaign understood by fewer people than the Safe Sex Lottery was Benetton Hearts, which was comprehensible to only 45 per cent of respondents.

The research clearly shows that shock tactics still work: consumers believe that a shocking campaign gets its message across effectively. Indeed, there is some support for the idea that the more shocking and controversial the executions are, the more successful the campaign is. This survey shows that shocking imagery does still have an impact even on today’s world-weary consumers, but it also suggests that such tactics should be used for important campaigns, such as public-health announcements, rather than being hijacked by consumer goods manufacturers.

Telecoms company Toucan is reviewing its estimated £3m advertising account held by BMB. The review is being overseen by marketing manager Miles Barry and comes at a time when the race to lure customers away from BT is intensifying. The company spent less than £1m on advertising last year, but that figure was considerably higher […]

Siemens is a frontrunner to sponsor the Chelsea football shirt, as first revealed in Marketing Week (July 8). Siemens is already the club’s telecoms partner.

It may be soft, strong and very, very long, but ‘luxury’ bathroom tissue is also blocking the UK’s drains.