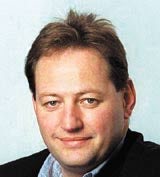 Last week I attended the Marketing Week Television Conference, under the title “Capitalising on the expanding potential of TV: thinking outside the 30-second box”.

I have attended this event many times, and I left feeling rather depressed about the state of commercial TV but rather heartened by the opportunities that may well exist elsewhere. The harsh reality for commercial TV is that there is not a communications planner or advertiser who could convince a board of directors that their spend in TV advertising should represent 80 or 90 per cent of the budget as it once did. TV budgets are being slashed everywhere, by as much as 30 or 40 per cent, and it seems that the world has changed. A smart communications director is now more likely to find praise for her efforts in the work she has done outside TV, in particular around the internet.

It is clear to me that clients have a deeper understanding of consumer behaviour, and advertising agencies have an excellent view of media consumption habits, changing lifestyles and attitudes. Advertisers are clearly saying to broadcasters that we understand the value of content: so give us great content and we will advertise around it. It seemed bizarre to me that the only content that was shown was branded content for Adidas, which I didn’t understand. I also think that it is strange that despite new initiatives like Thinkbox, not all the commercial broadcasters bothered to turn up. It’s a shame, as I am sure that customers would have wanted to speak to them. I think there are a lot of talented people in TV trying to do their best, but they definitely lack confidence, or indeed an understanding of how consumers interact with TV.

For the past three years I’ve been managing director of London’s evening newspaper, and I’ve seen numerous presentations from all media, yet I’ve never had anyone come in to recommend that I use more TV. TV has to understand it needs to get out there and sell. A salesman’s greatest tool is a testimonial, though an even more bizarre twist was to use Levi’s as a testimonial for the power of TV. Whilst I accept the ads are great content, have you seen Levi’s market share figures recently?

One could easily have taken the message of the conference as “It’s OK to spend less on TV; if you must do something, perhaps it’s branded content; and by the way, spend more money on the internet because everyone else is.”

TV needs to be more unified in its approach and stop blaming ITV for everything. Without question, I learnt much more about the internet and how powerful that has become than I did about TV.