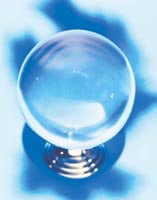 Broadcasters, advertisers and agencies have called for the advertising of “occult” services, such as horoscope readers and clairvoyants, to be allowed to appear on television.

Responses to the Independent Television Commission’s consultation on its advertising standards code argue that the services should be allowed as they can be regulated through existing standards covering misleading advertising and advertising to children. The revised code is expected in late summer.

BSkyB argues that the current restrictions “bear down hard on specialised ethnic and religious channels, where predictors are part of particular religions’ belief structures”.

It adds that “in a multi-channel environment it is difficult to see what mischief could be caused”. The argument is echoed by Asia TV.

The Advertising Association, which represents the Incorporated Society of British Advertisers and the Institute of Practitioners in Advertising, argues the ban should be lifted providing the ITC ensures children will not be exposed to the ads.

Although the ads – many of which ask people to call premium rate telephone numbers – are allowed on the radio and in print, they have never been permitted to broadcast on TV.

However, there was discord within religious groups, including the Reformed Presbyterian Church of Ireland, and The Methodist Church, which argued the ads could be psychologically harmful.

The Advertising Association, along with Slim Fast and its agency Grey Worldwide, also looked likely to anger anorexia and bulimia groups by arguing that slimming product ads should be targeted at children as young as 16. At present, ads must be targeted at the over 18’s.