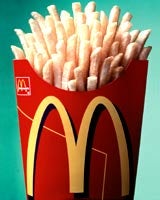 McDonald’s has escaped another rap from the television watchdog for its latest ad, which attracted 103 complaints from people who thought it was offensive.

The Independent Television Commission (ITC) did not uphold the complaints about the ad, which featured a young boy playing off his estranged parents to ensure he receives two McDonald’s meals.

Complainants said the campaign, created by Leo Burnett, made light of family break-ups and encouraged children to lie. Other viewers were worried that the ad promoted un-healthy eating with the boy having two McDonald’s meals in one day.

The ITC calls the scenario “mildly humorous” and says it does not consider the ad “is likely to be any realistic encouragement of undesirable behaviour.”

McDonald’s pulled an ad in May which showed a dog attacking England star Rio Ferdinand following the real-life mauling of a five-year-old (MW May 23). The ITC received six complaints and McDonald’s dropped the ad after two days.

The fast-food company signed a £1m sponsorship deal with GMTV last month to support the weekend Diggit strand for children.