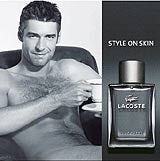 The latest television advertising for Procter &amp; Gamble BeautÃ©’s Lacoste Homme toiletries range is being investigated by the Independent Television Commission (ITC), after more than 30 complaints about male nudity.

The Lacoste TV ads, shot by famous photographer Herb Ritts, feature a naked man getting out of bed and strolling through his apartment. There is no full-frontal nudity, but the man is seen naked from the rear. A print execution features the same nude model reclining in an armchair, sipping a cup of tea. The campaign uses the tagline “Style on skin”, and was created by Grey Worldwide, Paris, with media buying by MediaCom.

An ITC spokeswoman confirms that the regulator received more than 30 complaints about the ad from viewers who were offended by the man’s nakedness, and that the ad is being investigated.

Lacoste Homme is the first toiletries range to be launched by P&G BeautÃ© since it bought the Lacoste licence from Jean Patou last year. Targeting young men, the Lacoste Homme range comes in a silver pack emblazoned with the Lacoste crocodile icon.