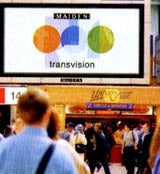 Outdoor advertising company Maiden Outdoor and ITN have teamed up to provide a news service on large screens at mainline stations in London and around the UK.

The service, first displayed at London’s Victoria Station, will run on a 48-sheet size screen, called Maiden Transvision, situated next to the indicator board. The service will be interspersed with advertising, which will be sold by Maiden Outdoor.

Advertisers will be able to run “electronic posters” and silent television ads between the latest news, sport and business updates and weather forecasts. The service will feature moving pictures, but in place of audio there will be text-headlines from the top stories of the day provided by the ITN News Channel.

Maiden and ITN have plans to roll out the screens to all other London mainline stations over the next 18 months, followed by provincial stations.

Maiden estimates the weekly audience at Victoria station to be 1.4 million people, 85 per cent of which are ABC1. On average, commuters spend 19 minutes on the concourse when travelling by train.

Michael Jermey, ITN’s director of business development says: “ITN has worked closely with Maiden to develop a format that maximises the expertise and content of the ITN News Channel.”

In a statement to analysts this week, Maiden claims its bookings for January have increased 37 per cent compared with the same time last year.