Shoppers are now researching more than they have ever done in the past before making purchases and seeking out discount vouchers.

Online searches for terms including ‘voucher’ or ‘vouchers’ increased fourfold over the space of a year according to Hitwise, however aggregation sites are seeing sliding traffic as consumers grew distrustful of them and the deals they offered, despite searched for vouchers and discount codes remaining high.

A sure sign that the industry needs to re-evaluate what it offers to consumers and if it’s providing the optimum service, something which some are already doing.

A new aggregation site, VoucherHub.com, launched last week from the company behind RetailMeNot.com, a U.S. based voucher site and seems to be challenging UK sites head on calling the industry “stagnant” and describing the tactics they use as “scammy”.

Search engine AskJeeves.com, has this week launched a search channel dedicated to discounting. It’s partnered with big-name retailers such as Argos and Dixons, as well as local business around the UK so that when users search for retailers or restaurants, it will unearth the best deals available.

It’s circumventing the discount vouchers sites because consumers find them a minefield to navigate, according to Ask Jeeves managing director Cedar Mascaraque and the new search function it offers hopes to have a “zero frustration factor”.

So while these new additions may shake up the industry and give consumers alternative search channels, I think the smartest move is from MyVoucherCodes.com, one of the UK’s most established voucher aggregator sites.

It announced it was embarking on a massive a direct mail push that will see the online brand distributing a 45-page book of vouchers to one million households in time for the festive period.

The move from MyVoucherCodes is a sharp one I think and one that brings the voucher industry full circle.

Discount coupons originated as cut-outs in newspapers and magazines and on packaging, then online sites such as MyVoucherCodes rose to prominence as consumers took to cyber space for their fix of discount coupons.

It recognises that although it may feel as though the internet is a ubiquitous part of daily life – there is still a sizeable chunk of consumers that are not. Instead of relying on consumers seeking out its deals and promotions – it puts them directly in the consumers hand.

The hard-copy vouchers will be welcomed by traditionalists, and will serve to build trust in the MyVoucherCodes brand and draw previously uninitiated consumers onto the online site.

The site currently attracts nine million unique users each moth, a figure it expects to grow to 11 million by Christmas. By moving into hard copy coupons, the brand is diversifying and expanding its reach.

MyVoucherCodes is covering all the bases, and has recognised, much like high street retailers have that they cannot exist without a physical and online presence. 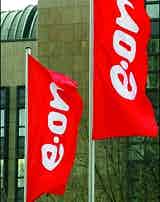 Eon is looking to boost the return on investment from its direct marketing activity.

The Industry Trust for IP Awareness (ITIPA) has kicked off a campaign with the Sun and Lock, Stock and Two Smoking Barrels star Nick Moran to clamp down on film and TV piracy.