For the past two years, the world’s razor industry has been as mundane as the daily chore of shaving. Since Wilkinson Sword launched the four-bladed Quattro razor in 2002 and thereafter blunted rival Gillette’s efforts to sue it over alleged patent transgression, the clash of blades has been somewhat muted.

While the battlefield has quietened, with few recent product launches, Wilkinson Sword has been busy restructuring its marketing department in the UK (MW last week). The company has poached General Mills marketer Elizabeth MacGregor to be its UK marketing director, replacing Richard Nall, who leaves at the end of June.

There have been a number of changes to Wilkinson Sword’s management team since the appointment of European vice-president Colin Hutchison, a former McVitie’s marketing chief, last year (MW May 6, 2004). It is not clear whether these recent changes are a prelude to any major product launches in the UK.

Wilkinson Sword launched “breakthrough product” Quattro as the answer to Gillette’s Mach 3, which has been a staple of men’s grooming worldwide since its launch in the late 1990s. Soon after Quattro’s launch, Gillette demanded the product be withdrawn from the market, claiming that it breached patents established during the development of Mach 3. But the case resulted in a humiliating defeat for Gillette.

Wilkinson Sword has been owned by battery maker Energizer since 2003, while Gillette was bought by P&G earlier this year. The market is expecting a raft of new developments with sophisticated technology as a result of the P&G-Gillette tie-up. And though Wilkinson Sword is said to have been steadily eroding Gillette’s market share advantage over the past couple of years, the brand appears to be little threat to Gillette – which still has about two-thirds of the global wet-shaving market.

Value Engineers director Giles Lury says: “The problem for Wilkinson Sword is that not only is it number two to a giant, but the giant has been bought by P&G. It will become ever more difficult for Wilkinson Sword, as the challenger brand, to fight Gillette’s might.”

Despite the lack of any high- profile new brand launches, the war between the David and Goliath of the shaving world rumbles on. Last year, Gillette announced that it was fast-tracking the launch of its battery-powered Mach 3 variant M3 Power (MW January 14, 2004). In anticipation, Wilkinson Sword had already planned the first Quattro brand extension – a black-coloured variant – to challenge Gillette in the key Christmas period.

Wilkinson Sword has also forced Gillette to change the strapline on its M3 Power advertising in Germany and the UK (MW November 11, 2004). The ads claimed that M3 Power gives a closer shave. At the time, Wilkinson Sword said it was considering court action.

But Lury says the wet-shaving market has become too predictable to excite consumers. “The razor market seems to be all about adding extra blades. In order to make a difference, the manufacturers will need to do better than just producing a Quattro after the launch of Mach 3.”

He adds that, unlike Gillette, Wilkinson Sword has been blade-focused and has failed to make the transition into the grooming market in the way Gillette has, instead using partnerships such as that with King of Shaves. “At a time when Gillette plays on its American personality, maybe Wilkinson Sword needs to change its positioning and become the Hackett of the grooming world. It could begin by dropping ‘Sword’ from its name, making it seem more modern,” he says.v 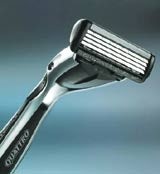 Wilkinson Sword says it has been the manufacturer of the “finest swords and knives in the world” since 1772. In 1804, King George III appointed the company as Royal gunmaker.

Now a US group called Schick-Wilkinson Sword, and based in St Louis, the company was acquired by Energizer Holdings from Pfizer in March 2003, for $930m (&£545m).