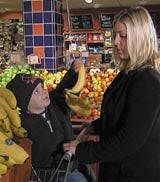 Marketers can no longer treat “the family” as one homogeneous target group, because lifestyle and spending patterns change drastically with the birth of the first child in any family. A recent Datamonitor report reveals that with the emergence of a new consumer group – young families – marketers will need to consider new ways of targeting this segment.

Datamonitor defines the young family group as those with only a one child aged under two. The study points out that there has been a great deal of research into marketing to children and parents, but very little is known about how consumers react to the transition to parenthood.

The birth of the first child represents a massive life change. There are new practical issues, such as the need to choose and buy baby products, and the necessity of conducting normal housekeeping chores under increased time restraints. There are also changing attitudes, like an increased focus on health and safety issues.

In 2001, there were about 5 million parents across Europe, who had only one child aged under two. Between 2001 and 2006, the young family group is forecast to decline by an average of 0.4 per cent a year, because of falling birth rates and a sharp decline in the number of 20to 25-year-olds. Despite this, Datamonitor believes that increasing economic welfare and changing attitudes towards children and child rearing will continue to change the value of the young family market.

One of the main reasons is that more mothers are working. This increases household income and the need for childcare services. Also, the gender gap in parenting is narrowing, with fathers becoming more active in childcare. The survey shows that male respondents spend about nine hours a week caring for children, compared with an average of 13 hours a week for women.

As birth rates fall, there is a tendency to delay childbirth until later in life. This not only means that parents will be wealthier when they have their first child, but also implies that their additional years provide a maturer attitude.

Parents are also becoming increasingly conscious of the threats that modern society presents to children. Although risks such as teenage pregnancy, crime, drug use, eating disorders, violence, bullying and low educational attainment do not directly impact on children aged under two, media attention on these subjects heightens parental awareness of these threats. This is likely to impact on the amount parents spend on services such as education, and also, through changing attitudes, affect issues as simple as children’s diets.

Shopping habits vary across low-, medium-, and high-income young families. Across all income groups, the largest change in expenditure is on restaurant meals and drinks in bars and pubs, showing an overall decline of 26 per cent and 28 per cent respectively. The survey also reveals an overall increase in the consumption of f

resh fruit and vegetables, and organic food and drinks of 18 per cent and 11 per cent respectively. Chilled ready meals and frozen convenience food show little significant change, except for low-income families, which are spending more. Likewise, an increase in take-away food consumption by medium-income consumers is offset by a decrease in consumption by low-income consumers.

Despite differences in income, there are several facets of young families that remain true across the income spectrum. Most parents are increasingly concerned about all aspects of their children’s welfare. This is especially true of first-time parents.

Time pressure is another feature of child rearing, regardless of income. Although many new parents make use of childcare services to allow them to balance work and parenting responsibilities, the impact on social time remains significant for all, and this has a profound impact on lifestyle and buying habits.

Easing the shopping experience is also important for young parents. The demand for faster, more convenient solutions drives new parents to change their shopping habits. Some become more organised and do more weekly bulk shopping, while others make greater use of Internet and home-delivery services. Datamonitor reveals that since most parents often have to take their children with them while shopping, they are concerned about the lack of retailer services, such as narrow checkout aisles and dirty or substandard trolleys.

Datamonitor believes that marketers and manufacturers cannot treat young families in the same way as families in general. The period of adjustment and learning of a new lifestyle presents opportunities for manufacturers and retailers to provide for the specific needs for products (such as high-quality, healthy convenience foods) and services (like assisted shopping) of these consumers. They also have to take advantage of this group’s higher propensity to brand and retailer loyalty. A successful strategy in targeting young families will not only reap rewards in terms of direct sales, but will also have positive effects on the ability to target these consumers through their years of parenthood.