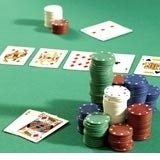 The UK is one of the fastest-growing and competitive internet gambling markets, and could witness frenetic marketing activity following the scrapping of restrictions on TV advertising and the arrest of the head of BetOnSports in the US on racketeering charges. By David Benady

As US authorities last week launched a crackdown on internet gambling, regulators in the UK were preparing to boost the industry by scrapping restrictions on television advertising for betting chains, casinos and online gambling companies.

On the face of it, these two events appear unconnected. But some observers believe that if internet gambling companies – many of which are listed on the London Stock Exchange – find their sizeable US operations are restricted, they could decide to bolster their UK presence through the newly deregulated options for advertising.

The arrest in Texas last week of David Carruthers, chief executive of UK-listed website BetOnSports, on charges of racketeering threw the $12bn (&£6.6bn) global internet gaming industry into turmoil. Internet gambling is a legal grey area in the US, and the arrest prompted fears of a wider clampdown on online gambling firms.

Many of the biggest internet gambling companies, such as PartyGaming, 888.com and Sportingbet.com, are London-listed but earn over half their income from players in the US.

Following the arrest of Carruthers, over &£1bn was wiped off the shares of the biggest UK online gambling stocks. Confidence in the sector has been shaken, though optimists believe the US action is related primarily to sports betting, while others think the crackdown is specific to BetOnSports.com’s founder Gary Kaplan.

Even so, the stark contrast in attitudes to gambling between the two nations – it is reviled and restricted in the US, while it is about to be heavily deregulated by the UK Government – has led to an unbalanced relationship. The UK is one of the fastest growing and competitive internet gambling markets, and could become a scene of even more frenetic marketing activity should the US be ruled out of bounds.

The UK’s television airwaves are likely to be thrown open to ads from all gambling companies in September 2007, when the Gambling Act is implemented. One source says that while many gambling firms may not plan to advertise, they may find themselves drawn into it for fear that rivals will gain an advantage by taking the plunge into television campaigns. “It could be like the dot-com advertising boom and take off with a big land grab for media exposure,” he says.

If the UK gambling industry – worth an estimated &£50bn “staked” a year, according to Nottingham Trent University – were to spend a similar proportion of its revenue on advertising as, say, the National Lottery – less than 1% – this could eventually create a &£400m to &£500m potential annual ad spend. One source says the spend could be at least &£100m in the first year alone.

The internet gambling industry has shown how promotion through the media can attract new players and boost their outlay. Only last week, London-listed Partygaming.com said it would launch an ad campaign across the US and Europe to back its PartyCasino site, defying fears of a US crackdown. The company also revealed strong financial results for the three months to June 30, as group revenues rose nearly 50% to $320m (&£176m) with online poker and casino performing well.

Meanwhile, 888.com says it is “carefully monitoring events in the US”. The gambling company spends some $100m (&£55m) a year on marketing, and has a heavy presence in the UK with its shirt sponsorship of Middlesbrough Football Club.

However, not all observers agree that online gambling companies will rush into TV ads in the UK. According to consultant Gareth Wong, they would shy away from heavy campaigns, which can be difficult to measure accurately compared with online marketing. “Gambling firms are very much driven by revenue and return on investment. TV advertising is unlikely if it is purely brand building without a return path,” Wong says. He adds that the great burst of advertising for internet gambling companies in the UK a few years ago took place prior to the flotations of many of the companies, and was really aimed at investors rather than consumers.

It recommends that ads do not target children and young people or vulnerable groups such as those with financial problems, and do not link gambling with sexual success or enhanced attractiveness. However, one source says: “These bodies do not understand betting and gambling – they see lots of nasty men stealing money from poor people, so they will do their very best to restrict the potential of advertising.”

Still, the CAP has so far ruled out ads carrying warnings such as “please play responsibly” or “know your limit, play within it”. The consultation document says there is no evidence such warnings reduce gambling among vulnerable adults or remind the public of the risks posed by gambling. In fact, it says there is evidence that warnings could make matters worse by increasing the desire to use the product.

Gambling companies are considering their responses to the consultation but say they cannot decide how much they will use advertising next year until they have a clearer idea of what they will be permitted to do.

Chris Edgington, group director of marketing for the William Hill betting chain, says: “In principle, we would really welcome the idea to generate great awareness for our sector. But only 5% of the public bets regularly and it is a small market. Buying ads in the centre break of Coronation Street won’t work.”

Meanwhile, Simon Burridge, chairman and chief executive of Virgin Games, says that internet-based companies would find it hard to justify TV advertising, as it is untargeted and lacks the measurability of online ads. “I think radio is a good opportunity, but the expense against the number of customers you get and the length of time you keep them make it a gamble,” he states. He adds that his company can also use the Virgin network for promotion, saving costs.

By contrast, Richard Sowerby, former sales and marketing director of bingo chain operator Gala, says that allowing bingo operators to advertise on television and radio from 1997 “made a huge difference”.

He says advertising was instrumental in shifting the profile of bingo players and attracting a younger, more upmarket following. “It used to be a C2D profile, but now 21% of Gala’s customers are BC1s,” he says. While the average age of bingo players used to be 55, now it is 45 to 48, and the average age of new members is under 35. He predicts that gambling companies will dip their toes in the water with test campaigns before committing to large scale spending.

The UK’s deregulation of gambling advertising could throw a lifeline to internet gambling firms if they are prohibited from working in the US. But many companies could find themselves dragged reluctantly into the advertising game for fear of losing ground to their rivals. The winners of this particular jackpot are likely to be UK media owners who have much to gain and nothing to lose from deregulation.