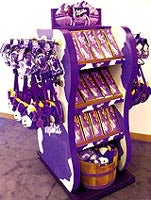 Point-of-purchase (POP) material is the last chance a brand has to influence the buyers’ decision and clinch that all-important sale. Debates may rage over its effectiveness, but any opinions are academic if the material itself doesn’t turn up, arrives in stores at the wrong time, or ends up languishing in the storeroom unpacked.

POP is not only fighting those who believe it is ineffective – its biggest enemy is indifference. An attitude which, according to the POPAI Display Compliance in Multiple Grocery Study published in May, means that some 38 per cent of POP displays are relegated to the graveyard of marketing material never to be seen by customers. The logistics of a POP campaign are long and often complicated, with many hands not necessarily making light work of it.

From its initial conception, POP material has a difficult road to travel to make it to the shop floor. Fraught with possible problems from the point of creation, through the printers and collators, to delivery. Once a display reaches the store, it needs to be assembled by staff who are both willing and able.

Bernard Guly, managing director of design consultancy View, says that finding the creative solution to a POP campaign is the easy part.

“It might sound boring but there really is no substitute for tight planning. Too many clients forget that POP material that arrives late or doesn’t get used properly, is hugely expensive – not just the direct cost of the wasted materials, but the cost of all those missed sales,” he argues.

Guly is amazed that clients spend so much time looking at creative portfolios and haggling over prices, yet an agency’s logistic standards are hardly ever broached. He suggests clients demand unconditional service guarantees: “They’ve been around in the States for a while, but have been slow to get established here in the UK.

“Basically, service guarantees recognise that failure has a cost. They make agencies accountable via financial penalties for ensuring that the POP material is ready on time and is fit for the intended purpose. But they are also motivating, because they mean the agency will profit if the campaign goes well,” says Guly.

Any agency should be able to put together a plan and ensure this is workable; not just a wish list, destined to fail because it has impracticable forecasts and no contingency structure. Although, according to Guly, agencies appear to be improving the planning process. “A lot of extraneous steps have been cut. Agencies have centralised much of the work and it is now tightly run with production and printing fairly well tied down. People are now starting to see that the logistics and management of a campaign is just as important as the creative,” he says.

This seems to be where agencies such as NDI Momentum have etched their niche, taking on the entire process for a brand and seeing it through from conception to installation. Such agencies are able to build relationships with key people throughout the chain to ensure everything runs smoothly.

NDI Momentum managing director Rob Gleave believes that much of the planning behind a POP campaign goes unnoticed by clients. And often they do not realise the amount of relationship building that lies behind a successful operation – relationships have to be established with the printers and distributor (although much of this is done in house by the larger agencies) as well as the staff in the stores.

Gleave says that getting a campaign to a store, and running on time, largely depends on NDI Momentum’s special teams, who work with the same suppliers/retailers time and time again. Also, on large installation projects, workshops are put in place so that all the staff from the merchandisers to the installation crew know exactly what is expected.

In a recent project for Boots, NDI Momentum organised a road show that went around the country training and briefing Boots’ staff on exactly what was expected so that they could iron out any possible problems. The project was to replace old cosmetic displays and this involved most of the cosmetic companies sold through Boots – so correct installation of POP material was crucial.

But the expertise of a specialist agency comes at a price – a price not all POP producers are willing or, with tightening budgets, able to pay.

If time and costs are limited, the one area of the POP process that brands cannot afford to skimp on is installation. This is highlighted by Point Of Purchase Advertising International (POPAI) general manager Martin Kingdon, who quotes the POPAI display compliance study, which claims that although 90 per cent of POP displays reach the correct destination, only 62 per cent end up displayed in the store.

The problem, according to Kingdon, stems from poor communication, especially at the multi-grocer level. The primary contact between brands and stores is through the category buyer, who is of little help when it comes to a POP display in the store.

Managers have overall responsibility for a store, but it is generally the assistant on the shop floor who is put in charge of installing a POP display. The shop assistant, clichÃ©d as it may sound, is often poorly trained and even more poorly paid – not the best person to make sure your brand is given the best opportunity possible.

POPAI plans to tackle this problem through training and is in the initial stages of talking with major retailers to see what can be done to raise the percentage of POP material that makes it to the shop floor as was intended.

But what can be done in the meantime? Simplicity seems to be the key. One of the first steps towards making sure any display has the best prospect is to make it as simple to construct as possible.

Three minutes seems to be the time allocated by most industry players. If someone can’t understand how a display is put together within three minutes, the chances of it ever seeing the light of day are very poor indeed.

“Retailers, more often than not, don’t have time to assemble POP material, which can actually lead to it getting binned. This is becoming more common as POP displays become more technologically complicated and interactive, and hence harder to assemble,” he says.

But it is not only how it is put together – retailers these days are putting their foot down as to what materials the display can be made of; cardboard, which can quickly become battered and tired looking, is often rejected.

Green says experts must oversee the procedure. “To ensure you maximise the return on investment from any POP campaign, it is vital to employ people who understand the retail environment and who can monitor and action logistical issues.”

He believes field marketers are best placed to take on this role as they liaise daily with the retailer. They know what works where and can tweak a campaign if needed.

Green says: “Not following up on logistics means a large outlay for little return. POP material can no longer be dumped at the store on the assumption it will be assembled correctly and in the right place, because the chances are it won’t be.”

The proliferation of POP promotions has meant retailers are tired of being bombarded with numerous displays and each brand vying for the prime spot in the store. Store managers have their own business to run, in many cases not having enough hours in the day to do that, without the extra worries of whether a POP display is assembled correctly.

If an advertiser cannot afford to employ specialists to ensure that a POP logistical chain operates smoothly, to increase the chances of a POP campaign working, two golden rules need to be applied: make sure the display is easy to install and communicate every step of the way, especially with the people who will be installing it.

If these are overlooked, even the best display will only be admired by its creators, and never by the customers it is targeting.