UK consumers are increasingly committed to tackling climate change, despite challenging economic times, and although they recognise brands for adopting green initiatives, these efforts are not yet leading people to show deeper loyalty or feel more trust for brands. This is a major finding of recent research carried out in the UK, the US and China by non-profit organisation The Climate Group, in partnership with Sky and brand strategy and design consultancy Lippincott.

This is the third year the research has been conducted in the UK and US, but the first time it has covered China. Over 1,000 consumers were surveyed in each country; respondents in all three rated climate change as one of the top five global issues.

UK consumers are more committed to combating climate change than they were last year: 24% are making a significant effort (6 or 7 on a scale of 1-7 of agreement), an increase of 9% from last year. US commitment similarly rose, while China shows the highest commitment of all.

When looking at consumer involvement across specific sectors, we see greater personal action in more obvious high-carbon activities (household energy use and driving) than in categories such as food shopping. However, crucially, there is a notable rise in knowledge in the area of shopping. The most frequent claim in this sector is now: “I do some things but could do more” (up to 48% from 39%). In the same sector, there has been a decrease in those saying: “I am interested but do not know what I could do” (down to 15% from 22%).

Consumers are more receptive to manufacturing brands in the US and China. In the US, GE retains top spot followed by three automotive brands and one oil company, demonstrating strong US recognition of the part the car could play in solving climate change. The Chinese top four are all best known for domestic appliances and electrical devices, suggesting a slightly different focus on domestic energy efficiency.

The majority of respondents (67%) admire companies that are tackling climate change, but a minority (18%) are suspicious. This is an improvement from 2007 (56% and 29% respectively). All the leading brands inspire interest, acceptance and admiration to some degree.

The Co-operative Group came top for trust and admiration (24% for each): even during these troubling times for financial services, it continues to punch above its weight due to its long-established ethical credentials. M&S also scored well in these categories (22% and 18% respectively), and also in loyalty (17%, just behind Tesco at 19%).

When examined in detail, we see why many brands are not yet connecting well with UK consumers on climate change. Out of 16 “green” products and services tested, the brands behind only three were correctly identified. This suggests that many businesses are not yet building propositions that resonate with their brands’ positioning.

In addition, the propositions and stances most appealing to consumers are not always those they believe to be most effective in tackling climate change. Brands seeking to build greater connections with consumers on this issue will need to consider carefully how they can have the greatest impact: promote big, all-encompassing initiatives, or focus on tangible initiatives that consumers will respond to today? M&S’s “Plan A” is clearly succeeding with the first approach, and British Gas’s focus on energy efficiency is succeeding with the second. The answer for each brand will be unique. It is no longer a question of whether consumers will support, but what they will support.

Consumers can also be very sensitive to what others say about a brand, and particularly to negative press criticism if company claims are exposed as “greenwash”. For instance, 30% of people said they would definitely consider buying products or services from a retailer after reading its corporate stance, but after reading a piece of media criticism this intention dropped by nearly half to only 16%.

Whichever route a brand chooses to take, it must make sure the positioning is sustainable from the brand’s own perspective. 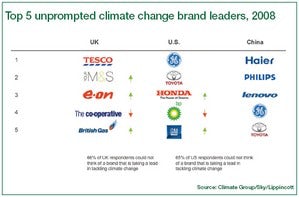 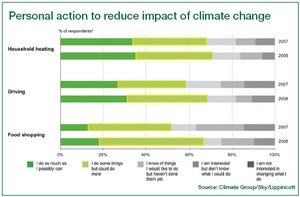 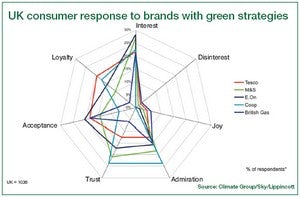