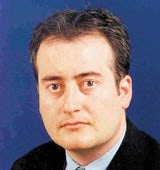 The annual round of TV negotiations has finished with each broadcaster trying to squeeze a quart out of a pint pot. The perennial question is, who is going to lose out? ITV will inevitably increase its audience, merely because last year its figures were decimated by the change in the measurement system, and there’s certain to be growth in satellite and cable.

But a question I’m often asked by clients is what will happen to Five in 2003? Though it has been unquestionably a very successful launch, commanding nearly six per cent of the audience share in its first five years, it is now at a crossroads.

I imagine that Five is confident. ITV has just suffered its worst year to date, a year in which advertisers were publicly committing to take money out of it and spend it elsewhere. Five’s audience levels, however, were stable and growing steadily, a position that at its inception the founding shareholders could only have dreamed of.

With that under its belt, Five should now be exploiting its position. But, it seems, it is letting the opportunity pass it by. For example, its programming budget of &£160m pails into insignificance against those of its competitors. Channel 4’s budget will reach &£430m and ITV’s will be more than &£850m in 2003. Yes, Five’s programme budget is up year on year, but surely this is the year for the channel to get aggressive. Even the most gifted director of programmes will struggle to increase audience figures faced with such strong opposition. Five’s owners are keeping the purse strings tight. Didier Bellens, chief executive of RTL – Five’s main shareholder – recognises this and has made a commitment to invest in programming that is successful. In other words he doesn’t want to take risks.

I suppose that’s the problem. Programming investment isn’t a science – if it was there wouldn’t be so many red-faced programme commissioners who turned down programmes like Big Brother and The Office. But the simple fact is, Five director of programmes Kevin Lygo and his team need money now. The axing of Chris Moyles’ programme last week shows that Lygo has sufficient courage to be ruthless in his pursuit of audience share, but the price of programming rights are forever on the increase and quality shows cost more than ever. If Five is to have ambitions of becoming a player in the commercial middle ground it will need more must-view programmes – and they cost money.

The goods news is that advertisers are desperate for Five to increase its audience share. They need strong alternatives to an ever-powerful ITV. Advertisers need audiences that are unique – not more average TV. If Five doesn’t invest more in programming in 2003, it will have just an average year. By January 2004, I expect ITV will have sorted its house out, and Five will have missed a once-in-a-lifetime opportunity.

Pedro Avery is director of trading at BLM Media