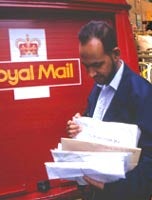 In March this year the accreditation scheme for mailing houses changed its guise: the Quality Standard for Mail Production (QSMP) replaced the Direct Mail Accreditation Recognition Centre (DMARC). On the face of it, QSMP has been hugely successful; already, just over six months after its launch, more than 370 companies have applied for official recognition within the industry, out of an estimated total of about 500 UK mailing houses. But many are unhappy with the programme and have voiced their concerns to the Direct Marketing Association (DMA). The contentious issues include Consignia’s role in QSMP and the way in which the scheme is promoted. The most cynical critics claim that QSMP is a watered-down quality standard that has been designed to serve Consignia’s – not the industry’s – interests.

Consignia is acutely aware of the possible conflict of interest posed by its involvement as QSMP’s financial backer. This situation is not helped by the perception that Consignia effectively bribes mailing houses to sign up for the programme via the mailing discounts it offers to accredited customers. As a result, Consignia has worked hard to distance itself from the day-to-day management of the programme. This is left to an independent auditing company, the British Accreditation Bureau (BAB), overseen by an advisory council comprising representatives from BAB, the DMA and Incorporated Society of British Advertisers (ISBA) – and of course Consignia.

QSMP programme director Samantha Hicks believes that Consignia is in an extremely difficult position. “Whenever there are problems with mail such as lost letters, Royal Mail gets blamed, but very often it’s because the letters were badly addressed in the first place,” she says. It’s therefore clearly in Consignia’s interest that mailing standards are raised. But the problem with QSMP is that its scope is limited to knowledge of Royal Mail products. Each accredited company has to have at least one member of staff who has passed a test on Royal Mail products so that they can make responsible and informed recommendations to clients. This person is then required to share this knowledge with other staff, any of whom are liable to be randomly tested during BAB’s site visits.

DMARC, by contrast, did not require accredited companies to have any knowledge of Royal Mail products. Instead, it focused on general quality standards, such as a commitment to comply with the Data Protection Act and British Code of Advertising Practice. But accreditation was afforded by self-declaration with no independent verification. Royal Mail trade association manager of media markets Alex Walsh believes that an unnecessary fuss is being made about QSMP. “It’s just not relevant,” he insists, “as these are conditions of the Mailsort contract, which all volume mailers already have with us anyway.”

Similarly, the DMA expects its members to uphold these standards so there is, arguably, a strong case for not including them within QSMP. But this argument doesn’t convince everyone. “Yes, it’s almost certain that a mailing house will already be compliant through some other avenue,” says one industry source, “but the point is that it’s not a certainty. If QSMP is going to be valuable to advertisers, we have to convince them that accreditation is a guarantee of the most basic quality standards.”

At the moment, the ISBA has no concerns about the limitations of QSMP and has no plans to consult its members on the issue. ISBA marketing services manager Caroline Whitehouse says: “We are constantly reviewing our position on all key areas to ensure that we represent our members’ interests but this just isn’t an issue at the moment.”

Could it be because awareness of QSMP is still low among advertisers? During the lengthy consultation process that preceded QSMP’s introduction, Consignia concluded that awareness of the original scheme DMARC was low and that there was, therefore, only limited value in relaunching under the same brand name. The danger, of course, of introducing a new name is that, to start with, there is no awareness at all. This is the main concern of many mailing houses, which are worried that QSMP is not being promoted heavily enough to potential advertisers. And there are fears that, in the light of recent cost-cutting announcements by Consignia, QSMP may be under resourced.

“Yes, Consignia is under financial pressure at the moment so we can’t guarantee anything,” argues Consignia’s Alex Walsh, “but there is no point in doing it if it’s under-funded. We’ve already invested a lot of money in QSMP and we’re not going to watch that investment go down the pan.”

DMA director of development David Robottom is keenly aware of the concerns being voiced by mailing houses. “If we don’t build awareness, the scheme will flounder. It’s not the DMA’s responsibility to promote QSMP because it is just a stakeholder,” he says, “but it’s critical to ensure that it is properly promoted.” As a result, the DMA has featured QSMP in much of its marketing programme, including a series of recent roadshows focusing on mailing houses.

Alan Halfacre, managing director of GWC Group, a Swindon-based direct marketing services company, who also sits on the QSMP Advisory Council, agrees on the importance of building awareness among advertisers. “QSMP gives mailing houses a real point of difference but it needs advertisers to be discriminating in their choice of supplier, because quality comes at a price,” he says.

The issue is how that awareness is built. In its efforts to stand back from QSMP, Consignia has allowed BAB free rein to manage the marketing strategy. But BAB, as one industry source complains, is not a marketing-led business and has made what many believe to be a strange decision in appointing a small public relations consultancy, In-House Communications, to manage marketing for QSMP.

Many mailing houses are, understandably, anxious that this is a signal that PR rather than advertising will be the main medium used to build awareness of QSMP.

Walsh thinks their concerns may be misguided: “We don’t believe that mass-media advertising is the right approach,” he says. “But trade press ads haven’t been ruled out and we will definitely be using direct mail as well.” The big issue is whether there will be enough in the marketing plans to keep the mailing houses happy.