Just in case you’ve missed it, England has won the World Cup – but this time it’s rugby. It’s the first time since 1966 that the country has picked up a World Cup trophy. And judging by the reception the team received at Heathrow in the early hours of Tuesday morning, the fact that it’s the rugby and not the football World Cup doesn’t seem to matter.

The win means a commercial windfall for English rugby, which will soon discover the sort of prices a “world champions” tag can command on the sponsorship market. The money has already started to pour in, swelling the Rugby Football Union’s coffers. O2 this week renewed its sponsorship contract with the England rugby team, increasing its annual fee to &£3m from &£2m (MW last week) and Nike has also extended its kit deal.

Will Harris, former O2 vice-president of marketing and now Conservative Party director of marketing, says the sponsorship is worth every penny: “This is a really important association for O2 because it is with the winning team. O2 ‘s England sponsorship associates the brand with incredible success.”

The tournament could not have come at a better time for rugby, which needs to cement its place as the nation’s second-favourite domestic sport. The current display of enthusiasm for rugby masks the reality that interest in the sport had been waning. A MORI poll during the summer showed that only four per cent of the adult population has played rugby, while participation in secondary schools has dropped from 39 per cent in 1994 to 28 per cent this year. Less than a fifth of the UK population expressed an interest in rugby union – down from a quarter in 1996.

These figures could well change given the unprecedented level of national pride in rugby over the past fortnight. Certainly, viewing figures suggest the game is set to enter its most popular period yet. The England-Australia final attracted 14.5 million viewers, beating the 12.5 million who watched the football World Cup quarter-final match against Brazil last year.

Granada ITV sales director Simon Lent says viewing figures were double the forecasts for certain games. “It has been a unique opportunity to advertise around a competition England could actually win. There have been some fantastic deals done, such as those done by Travelex for the ITV coverage.”

Travelex pulled off a coup in picking up sponsorship of ITV’s coverage for &£3.5m. Travelex head of group marketing Anthony Wagerman says: “This is the first major World Cup final since 1966, so it really was a huge opportunity for us. We knew there would be hardcore interest from dedicated rugby fans, but we could only hope for audiences outside this group.”

ITV will also be pleased with its World Cup expenditure, having seized the screening rights for what it says was &£10m, although this is part of an overall &£40m package paid for the rights to the 2003 tournament and the 2007 Rugby World Cup, to be held in France. The BBC acquired the Six Nations rights in a three-year deal worth about &£70m.

Lent says that last week saw a wave of last-minute advertising sales around the final, with Ford, Stella Artois, Nationwide, Hutchison and Right Guard finding money “out of the blue”. Some estimates put ITV’s earnings for the final at about &£30m, with up to &£120,000 being charged for each 30-second slot. 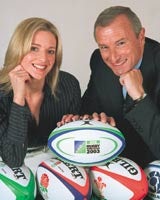 Lent says the rugby audience makes the coverage very attractive to certain brands. “It is difficult to reach the large number of males that follow rugby, especially in the ABC1 group. Football might have the numbers, but not necessarily in this group.”

Aidan Day, managing director of Octagon UK, which works for the European Rugby Cup and Zurich Rugby, agrees that rugby’s affluent male audience is a huge advantage when it comes to finding sponsors and advertisers, although he adds that the game is hamstrung by its lack of global coverage.

“The game is limited to the markets in which it has real impact, but its upmarket audience means that success in the World Cup delivers even greater value for commercial partners, particularly in those sectors with real resonance with the audience, such as financial services, alcohol and motoring.”

Day adds that sponsorship prices in rugby are expected to rise following England’s World Cup victory. “We will see more brands wanting to be involved, therefore creating a much stronger market,” he says.

RFU commercial manager Charles Allen admits that on-pitch success feeds into off-pitch commercial advantage. “A strong England performance does drive price. It has put rugby union in the spotlight, which helps at all levels from club to country. It has captured the hearts and minds of the nation, and this larger audience provides potential customers for sponsors,” he says.

Allen adds that there has already been increased interest from potential partners. The RFU earned close to &£10m last year from sponsorship, although it expects to boost this considerably next year.

RFU commercial director Paul Vaughan says sponsorship revenue could rise by 20 per cent, with gains only limited by existing deals.

The RFU is still seeking technology, audiovisual, airline and professional service partners, and is looking to companies such as Philips to supply screens at Twickenham. It is also renegotiating its contract with the Carlsberg-Tetley brewery.

Current sponsors of rugby are delighted with the coverage. England over-delivered simply by getting to the finals, according to industry sources, leading to performance bonuses from the major partners. Paul Samuels, head of interactive partnerships at O2, says the England sponsorship has been “extraordinary” for the brand. And this is despite the fact the team could not wear the O2 logo on its shirts owing to restrictions that limited sponsorship to official tournament brands.

Samuels says that O2 “had to be very clever and very careful to market around the event to maximise the brand coverage”. The day before the final, for instance, the company asked 200 England fans to parade around Sydney Harbour in front of the world’s press with a giant England shirt – bearing a giant O2 logo.

England sponsors O2 and Tetley’s are planning to launch a major celebratory advertising campaigns now that the team are home.

Just as rugby could experience a renaissance, so the players will benefit from World Cup victory. Fly-half hero Jonny Wilkinson already earns more than &£1.5m from promoting – among others – Mercedes, Cartier, Lloyds TSB, Lucozade, Tetley’s, British Airways and Hackett. Many of these contracts are set to expire and Wilkinson can expect to at least double his fees, though they are unlikely to match the huge sums that David Beckham is said to earn from sponsorship each year. 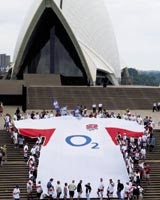 England’s rugby champions will not be the only ones to benefit from their World Cup victory. Credible performances by Ireland, Scotland and Wales have also boosted the commercial value of those teams.

This will particularly help the Welsh Rugby Union, which is struggling under a potentially terminal debt of &£67m. One WRU insider confides that the organisation was banking on a quarter-final place to keep the sport alive in the Valleys.

The WRU is searching for a shirt sponsor after Rockport decided not to renew its contract this year. WRU marketing director Gwyn Thomas says: “The cup has had a massive impact on the sport in Wales. Commercial activity has shot up. We are in the shop window and now have to convert this into revenue.”

Thomas says the WRU will also work to boost interest in the game at all club levels – not just national – which should ensure a strong Welsh side for years to come.

Lexus sponsorship director Chris Meredith, a former professional rugby player, agrees it is essential to nurture club rugby on the back of the World Cup. He says this year’s cup has attracted the fair-weather supporters of rugby once again. “Lapsed or occasional supporters have been re-engaged. It is up to the RFU to inject this national pride into the top clubs. Bigger audiences for the clubs means TV deals and sponsorship,” he says.

The RFU knows it has to support club rugby to ensure the long-term future of the sport. While Wilkinson may now be a household name, the same cannot be said of his club, Newcastle Falcons.

RFU’s Allen says the World Cup victory is an important first step: “After the 1991 World Cup final, there was a big surge of youngsters in the game. People want to emulate their heroes.”

Going back to the grassroots

The RFU has launched a number of programmes to harness the enthusiasm generated by the cup. It spent &£8m on development of the game in 2002, and launched the “Impact” strategy to encourage participation earlier this year.

This involves the introduction of rugby to 200 secondary schools and the establishment of 2,600 links between clubs and schools. About 100 rugby “festivals” are planned, including “rugby in the park” and “rugby on the beach”.

The success of the UK teams has also boosted UK hopes of hosting the 2012 Olympics. Marketing director for the Olympic bid David Magliano says: “England winning the World Cup will have a very positive effect on the bid. It reminds people that the UK produces world-class sportspeople.”

Magliano adds that the behaviour of the legions of fans in Australia will also show that UK fans are good-natured and enthusiastic at sporting events.

While Wilkinson says he hopes to emulate Beckham when coping with on-pitch pressure, the RFU will be looking to mimic the extraordinary commercial success of football.

Not everyone in the country knows the difference between a ruck and a maul yet, but rugby authorities hope the nation’s second-favourite game will grow in popularity and that more followers will come to understand its complexities.