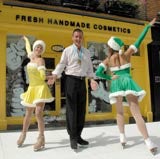 In the depths of 17th- and 18th-century winters, London played host to frost fairs. Ox-roasts, fairground stalls and performing animals all took place atop the thick ice that covered the Thames.

Since the end of the Little Ice Age, and the removal of the old London Bridge (its narrow arches, according to the River Thames Guide, slowed the river’s flow, thus facilitating icing-over), sufficient ice no longer forms on the river. So this year it was left to a cosmetics company to provide some frozen frolics for the Cockney hordes.

On one of the hottest days of the summer, Lush decided to create an ice-rink outside its Carnaby Street store, to launch its Christmas range and showcase its support for British ice dance team John and Sinead Kerr, whom it is supplying with special “ice packs” of skin- and foot-care products.

Also present, and enjoying the company of two lovely Lushettes, was 1980 Olympic gold medallist Robin Cousins, with his medal (created by Tiffany, no less).

As polar bears picked off shoppers in the alleyways off Oxford Street, and the Diary lost a foot to frostbite, a plaintive voice could be heard above the sound of icebergs colliding in the Serpentine: “I wanted a ‘facial’, not a ‘glacial’…”