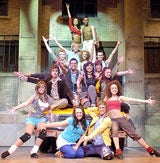 ITV has signed videogame label PlayTHQ to sponsor its flagship tween drama Britannia High. It will rotate idents for four Nintendo Wii and DS games across its sponsorship.

The drama will air in a Sunday night slot on ITV1 later this autumn, culminating in a 90-minute “finale” around Christmas. The drama will feature music by Take That songwriter Gary Barlow. Episodes will also premier on ITV.com a week ahead of broadcast.

Britannia High, which has been described as a cross between High School Musical and Fame, will be supported by ITV’s biggest marketing campaign of 2008, and a number of licensing and merchandising deals around the brand (MW September 25).

A range of Britannia High branded goods is expected to hit the shops in the run-up to Christmas, while ITV Productions and co-maker Universal Music also expected to release a number of singles from the show.

Content from the show will also run online, through mobile phones and red button services.

The broadcast sponsorship deal was negotiated by ITV Commercial and Mindshare, and the idents will be produced by The Victorians.