The CC provisionally concluded that CRR should be retained to protect advertisers’ interests last September but allowed that there could be some changes to the mechanism.

The CC’s published proposals today (19 January) suggest widening the definition of ITV1 to include an ITV1+1 service and an ITV1 high definition (ITV1 HD) service. It believes that this change will allow ITV to launch these new channels without being inadvertently penalised, as it would be under the current undertakings.

However, ITV says that the proposals now put forward by the TV regulator are based on the same misconception set out in the provisional decision last year, namely that the “competitive environment is still very similar to that identified in the CC’s 2003 report.”

ITV maintains that there is “an overwhelming case” for the abolition of CRR as a “disproportionate remedy” given the evidence of changes in the television advertising market since 2003 when CRR was introduced.

The broadcaster says: “This decision confirms the urgent need for a thorough and comprehensive review of the cumulative impact of regulation of the independent broadcasting sector.”

“CRR is now an outdated remedy and should be removed in its entirety. Because the Competition Commission has failed to appreciate the seismic changes in the market over the last seven years it presumes that advertisers require the same level of protection and certainty that they enjoyed in 2003.”

The changes would come into effect once revised undertakings are agreed with ITV.
The CC will publish its final decision later next month after hearing responses from the industry.

CC deputy chairman and chairman of the CRR Review Group, Diana Guy, says: “We found there is a strong case for widening the definition of ITV1 in the CRR Undertakings to include both ITV1+1 and ITV1 HD and this has been largely supported by ITV and other parties. We believe that this change will go a considerable way towards reducing the unintended costs to ITV of the current system.”

Bob Wootton of ISBA says: “This looks to be an appropriate and proportionate move which is in line with our expectations. The industry will be pleased that the final decision is to emerge in just a few weeks, as it needs to plan from a position of certainty and confidence.”

Bing was the fastest growing search engine in the US last month as it continues to close in on Yahoo’s market share.

Iain Tait from the digital agency Poke raised an interesting point on his blog after discovering Starbucks forces customers using its Wi-Fi facility to “accept the terms and conditions and agree to receive email marketing from BT Group companies”. 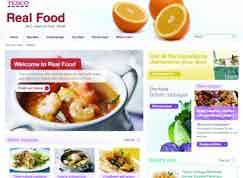 Tesco is launching a quarterly food magazine to complement its existing customer publication.