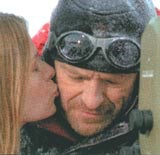 Jeremy Dale, the marketer responsible for introducing Monkey as the face of ITV Digital, has been appointed as UK brand marketing director – a newly created role – at mobile phone company Orange.

Dale, who joins Orange in the autumn, will take charge of all UK brand and advertising activities. He will report to executive vice-president for the UK John Allwood.

Orange is understood to have created the post to bring its brand and marketing communications departments closer. The company has named ex-Amazon marketer David Osborne as senior advertising manager.

Dale left ITV Digital in May, along with 23 other marketers, when the digital platform was forced to close down (MW May 2). Since then, he has been working as a consultant with ex-Orange marketing director Chris Moss. Insiders claim Moss “helped” Dale get his new job.

Dale joined ITV Digital (then ONdigital) in 2000 from Nintendo’s UK distributor THE Games.

In 2001, Dale axed BMP DDB as ONdigital’s agency, ahead of the ITV Digital rebranding. He appointed Mother, which created the Monkey ads to launch the new brand.

Much as I understand the temptation not to let the facts get in the way of a good story, I feel I must correct some inaccuracies in your article about my departure from COI Communications (MW June 27). First, I am on record as having stated that my departure from the COI has nothing to […]

Throwing money at an exhibition stall does not guarantee that you will stand out from your competitors. What you need is clear ideas, intelligent design, well-trained staff and, of course, a little bit of the ‘wow’ factor, says Matt Broadhead