ITV said that Earle’s actions were in breach of FIFA rules and that his contract had been “terminated with immediate effect”. The broadcaster is now reviewing its entire allocation of tickets for the tournament.

During the match, held in Johannesburg, a group of 36 women wearing orange dresses and promoting the Dutch beer brand Bavaria were removed from the stadium. The Dutch media reports that Bavaria has admitted paying the women to attend the match.

The brand has previous history of disruptive marketing at the World Cup – in 2006 as many as a thousand Dutch football fans turned up at games wearing branded orange lederhosen. They were forced to remove the trousers and watch the game, against Ivory Coast, in their underpants.

Budweiser is the official beer sponsor of the world cup.

NatWest and RBS customers are being promised that they are banking with the most helpful banks in the country as they launch a 14-point customer charter guaranteeing the minimum levels of service they can expect. 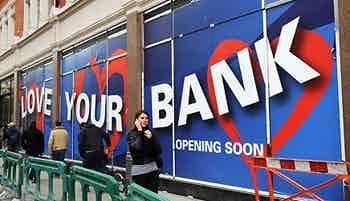 Metro Bank will become the UK’s first new full service high street bank for more than 100 years when it opens its first branch on July 29.