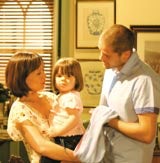 ITV Sales is looking for a &£10m sponsor for Emmerdale as Heinz’s association with the soap has come to an end.

The food manufacturer has sponsored the soap for the past two years, first using it to promote Heinz Salad Cream and then extending the relationship to cover Heinz Tomato Ketchup, in a 12-month deal worth &£10m. The deal covered both ITV1 and ITV 2 and introduced the tagline “It’s all going on”.

Emmerdale is broadcast six nights a week, and on Monday night was watched by an average audience of 9.1 million, with a peak of 10.1 million, giving it a 46 per cent share of television viewing.

The soap has enjoyed a renaissance in recent years, and is now competing with EastEnders and Coronation Street in popularity. Storylines have been shifted away from the traditional rural focus and spiced up to appeal to younger audiences.

Emmerdale, which is more than 30 years old, spent a year without a sponsor before its association with Heinz. Prior to that, Procter &amp; Gamble sponsored the show with its Daz soap powder.

ITV Sales hopes to find a long-term partner for the soap, similar to that Coronation Street has with Cadbury, which uses its association to promote its entire confectionery portfolio.