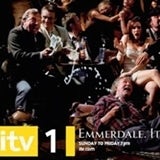 Activity for Emmerdale breaks on Friday and will encompass on-air promotion spots across ITV, press, poster and radio work. It has been created by the broadcaster’s in-house promotions agency ITV Creative, together with M&amp;C Saatchi, and marks the first time the broadcaster has worked with top industry directors.

An ITV spokeswoman says the campaign is based around the idea of a “modern masterpiece”, with the creative work aiming to capture the essence of the soap’s characters through a tableau of images. It will run with the tagline “It’s far from quiet in the country” and features key characters in a slow-motion scene. The accompanying Emmerdale theme tune is also slowed down.

ITV Creative controller Chaka Sobhani says the in-house agency will be working with external directors in the future as a result of the “new culture” at ITV. “It heralds a new era for us and one which involved larger scale campaigns with the use of viral promotions,” she adds.

The drive to put more marketing spend behind key programmes reflects the strategy at rival broadcaster Channel 4, which has put considerable spend behind programmes including Desperate Housewives and Lost.