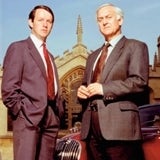 There’s nothing more important in the modern work environment than knowing your subject matter back to front.

It’s a lesson the Diary learnt while hosting a karaoke night recently, and confused Russ Abbott’s ditty Atmosphere with the Joy Division version. Suffice to say Great Aunty Alice’s Ian Curtis impression was valiant, if flawed, and there have since been repercussions from that branch of the family.

Maybe Simon Shaps, director of television at ITV, shared that same horrible hollow feeling when he recently told a room full of journalists that he was very proud of ITV’s new detective series Lewis, before explaining that the show was in fact a spin-off from the legendary show Minder.

It seems Inspector Lewis’ first appearance on our screens came long before he moved to Oxford and met Morse, and was in fact alongside Arfur Daley and Terry in Minder.

Given Morse’s love of opera and Minder’s more earthy musical tastes, the Diary wonders whether Kevin Whateley asked to “write the theme tune, sing the theme tune” when he got his own series.