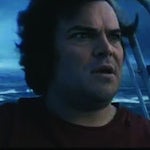 The new ad, created by Fallon, features Black in a spoof trailer of the soon-to-be released Gulliver’s Travels.

Recreating the iconic scene of Gulliver waking up after a shipwreck in Lilliput, he finds himself pinned down by an army of tiny captors before blatant Orange branding in typical comic style starts to appear.

Gulliver soon calls for “time out” when he realises an Orange phone shop has been set up on the beach in Lilliput, arguing that “just because I didn’t read the script doesn’t mean you can slip me into a commercial.”

Ignoring him, the director shouts “we’re still rolling” and whilst Gulliver launches into a speech about film integrity, the army of small people re-capture Gulliver.

Gulliver’s protest ends with: “we need to nail this scene…that means no cell phone selling…and you know what Mr Orange corporate man, I’m not your puppet.”

The tiny people then use their strings to control his body and make him do comic moves including the “dancing robot”.