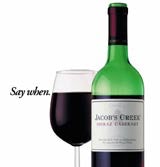 The Advertising Standards Authority (ASA) has rejected complaints that a poster for wine brand Jacob’s Creek which carries the strapline Group Therapy trivialises the treatment of problem drinkers.

However, a spokeswoman for the watchdog warned brand owner Pernod Ricard that the complaint could have been upheld if the new Committee of Advertising Practice (CAP) codes had been in force. The CAP rules, one of which states that ads cannot suggest that any alcoholic drink has therapeutic qualities, will be introduced on June 5.

The ASA also rejected complaints about a Coors Brewers cinema commercial for Carling lager, which shows a woman using the drink to get a man to clean the flat. The ASA says the ad, created by Leith, London, is saucy and playful but not offensive. It also says the ad is not demeaning to men.

Meanwhile, the ASA has upheld objections to a catalogue for SimplyOrganic Food, which claims organic animals are fed on vegetarian organic feed and that all growth promoters, hormones and artificial chemicals are banned.